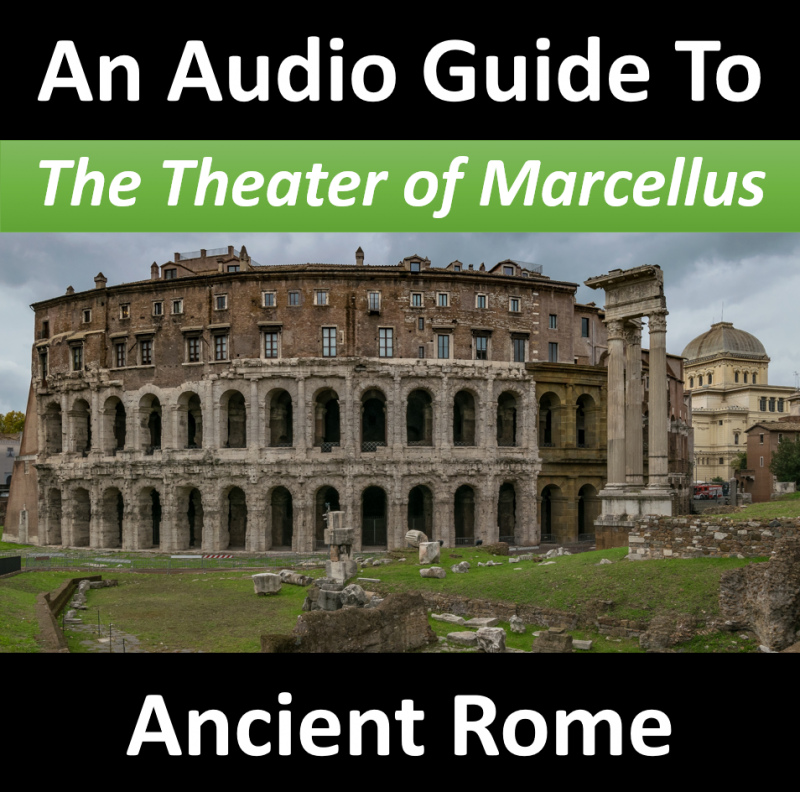 My name is Daron Green and in this episode I’ll be describing The Theater of Marcellus.

The Theater was named after Emperor Augustus’ nephew Marcus Claudius Marcellus however the building was originally commissioned by Julius Caesar who bought and cleared the land in a space to the south of the Field of Mars amongst a cluster of Temples and next to the Tiber.

A temple to Diana and a temple to Pietas had to demolished to make way for the building. When visiting the site you will see there are also the remains of a temple to Apollo to the North, immediately next to the Theater’s curved colonnade, and three temples to the south east; in the order moving away from the Theater these were dedicated to: Janus (the two-faced god of boundaries and beginnings) Juno Sospita (Juno the savior) and Spes (the goddess of hope). All of these temples are at least 190 years older than the Theater.

Notably, neither Julius Caesar nor Marcellus were alive at the time of the Theater’s opening – Caesar had been assassinated and Marcellus had passed away from an illness and the task of completing the project had fallen on Augustus.

The naming and official opening took place 10 years after Marcellus’s death in the same year that Augustus dedicated the Ara Pacis. Marcellus was the eldest son of Gaius Claudius Marcellus Minor, a former Roman consul, and of Octavia Minor, sister of Caesar Augustus. Marcellus, the Emperor’s nephew, married Augustus’ daughter Julia in 25 BCE thereby becoming also his son-in-law. He served under Augustus in Hispania alongside the future emperor Tiberius and was elected to a magistrate’s office at a very young age, an honor Marcellus celebrated by sponsoring extraordinary public games. His rapid rise to public office and close ties to the Emperor are said to have brought him into conflict with Agrippa and others.

This promising career was cut short when Marcellus died in 23 BCE at the age of 19. At that time an illness was spreading throughout Rome and first Augustus and then Marcellus would succumb. The emperor recovered but the illness proved fatal for Marcellus who passed away in Baiae – most likely at the imperial villa. Marcellus was the first member of the royal family whose cremated remains would be placed in the Mausoleum built for Augustus.

His mother Octavia built a library in his honor – the entrance façade to the this is very close to the Theater and can be accessed by following the pedestrian walkway that links the Temple of Apollo to what is known as Rome’s Ghetto area on Via del Portico d’Ottavia.
Augustus’ fondness of his nephew was expressed in his moving funeral oration, and in both naming the theatre and including exquisite funerary statues of him including one in which Marcellus is depicted as Hermes Logios. In Ancient Greece, Hermes was usually represented as a mature man, bearded, and dressed as a traveler, herald, or pastor. However, when depicted as Hermes Logios he was shown as a young, athletic figure and lacking a beard – something that, for Augustus, Octavia and the rest of Rome, would have strongly echoed Marcellus at the time of his death.

The architecture of the theatre had a significant influence on subsequent buildings in Rome and across the empire for example the design of the façade was reproduced in iconic buildings such as the nearby Colosseum and the Amphitheater in Verona. In particular, the theater structure had a curving double colonnade decorated on the outside with three orders or styles of columns, two of these are well preserved in the lower levels. Although now missing, the keystones of the external archways of the colonnade were decorated with ornately carved masks consistent with the tradition of Greek drama that were used by actors to show expressions of smiling or frowning.
The general layout of the theater is partly recorded in the Severan Marble Map of Rome that shows the portion behind the stage which seems to include two shrines for the displaced temples to Diana and Pietas. The stage wings each had a basilica and there was a series of supports surrounding the upper tier to accommodate the velarium – an extendable sail that could be deployed to shade the audience – something that would have been necessary given that this was an open-air Theater and the seating faced the afternoon and evening sun.

The theatre was 111 m in diameter and was the largest and arguably the most important in Ancient Rome. It is thought to have been able to accommodate more than 20,000 spectators. It was built mainly of tuffa and concrete faced with stones in the pattern known as opus reticulatum – this simply refers to a pattern of diamond-shaped tuffa bricks covering a central concrete core, although you can’t see it here at the Theater you are very likely to see this recognizable pattern in various buildings throughout the city where the underlying building core is exposed. This structure was completely sheathed in white travertine, a porous whitish limestone, taken from quarries close by the city. The Theater is notable as the earliest dateable building in Rome to make use of fired brick which, at that time, was a recent innovation learnt from the Greek world. In another personal touch, Augustus arranged for four massive and precious columns to be brought into the Theater to be used to decorate his royal entrance.

For its opening, Augustus commissioned special games and festivities. As part of this he had a golden statue of his nephew wearing a golden crown brought into the Theater and seated on a traditional Roman curule chair in amongst the dignitaries that had arranged the celebrations.

The Theater’s proximity to the river meant that the route of the city’s triumphal procession needed to be adjusted. Instead of going around the building it would be redirected to take advantage of the new facilities and passed in front of the stage and in full view of the theater’s audience. It is likely that Caesar’s original design had to be adjusted to accommodate this requirement – something that was achieved by widening the gap between the stage front and the seating.

Augustus was the first to implement a permanent seating law that dictated where people of different social class were allowed to sit. Those with less influence or less money were required to sit in the highest tiers and would enjoy only simple wooden seating. The lower tiers had stone seats and a more intimate view of the entertainment.

For four centuries the Theater provided a venue for plays, dramas, poetry recitals and celebrations however it gradually fell into decline as the empire faded and Christianity gradually took over as an influence in the City.

In the 11th and 12th Centuries the Pierleone family fortified the Theater as part of their defenses between Tiber Island and the Capitoline Hill. It was subsequently turned into a Palazzo and then separated into a number of apartments.

The next major change for the Theater came when Italian dictator Benito Mussolini opened up the surrounding area as part of his new “Romanità” – this was a fascist propaganda effort to justify right-wing extremism by drawing on Italy’s great heritage and, specifically, the might of imperial Rome. By the early 1900s, like many of the ancient Roman buildings, the theater had become crowded with piles of old ruins, shops, shacks and slum housing. Archaeologists had undertaken some exploratory digs at the beginning of the century but, given all of the overlaid structures, it was difficult to ascertain what remained of the original theater. Mussolini ordered the area completely cleared to allow the building to be renovated and restored to a recognizable state. Clearing the site and widening adjacent roads displaced most of the occupants of the Theater to other parts of the city. By the end of the excavations in 1932, over three quarters of the façade had been revealed, the barrel-vault had been cleared, and iron gates installed.

Today the building is used as a combination of private apartments and offices however there is good access to view the remains of the outer colonnades.