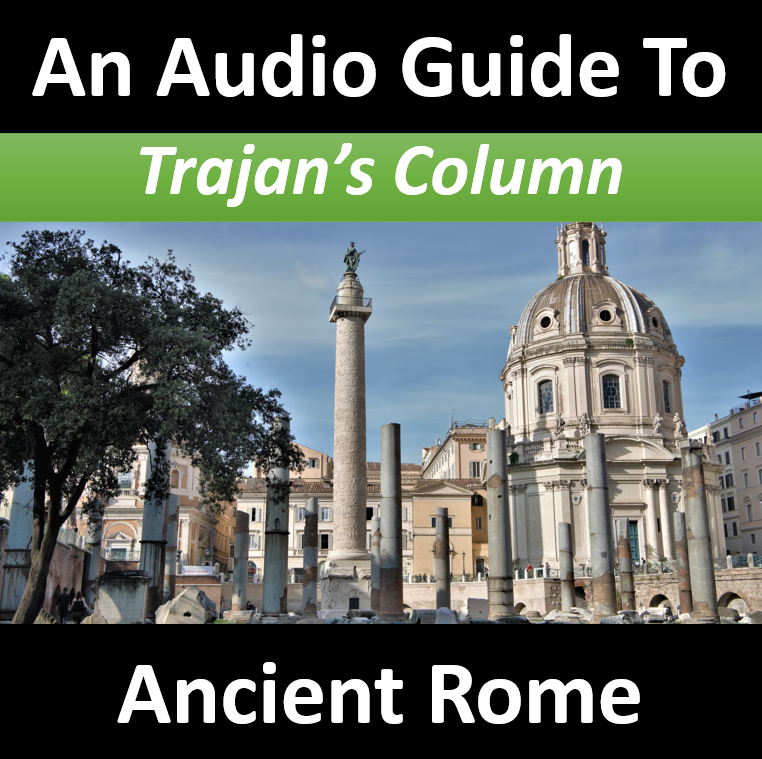 Trajan’s Column is a monument to Emperor Trajan’s victory in the wars with Dacia that took place between the years 101 and 106.

It was part of a sequence of constructions built by or dedicated to Trajan.  Over time, running from north-west to south-east, these included the Temple of Trajan, the Column itself that was flanked by two libraries, the Basilica Ulpia and the large expanse of Trajan’s main forum square.

From here this description assumes that you are standing in the middle of the curve-shaped viewing perimeter looking towards the Column.  Positioned there, the Temple of Trajan would have been behind you as its remains lie underneath the Palazzo Valentini.

The libraries flanked immediately to the left and right sides of the Column.  Sections of the parallel inner columns that define Basilica Ulpia’s main hall can be seen beyond Trajan’s Column.  Trajan’s main forum square would have been hidden from view behind the Basilica as would his market, which is over of the far left.

In as much as this is possible, the carvings on the column appear to have been intended to be viewed from this north-west vantage point with key scenes in the narrative always shown on this side.

The Column was likely designed and constructed by Apollodorus of Damascus at the order of the Roman Senate.

It is most notable today because of the exquisitely detailed relief work carved into the column, these give a clear narrative of Trajan’s two victorious military campaigns.

The lower section covers his first campaign from the year 101 to 102, and the section his second from 105–106. These two campaigns and sections are separated by a personification of a winged Victory standing in partial profile inscribing Trajan’s accomplishments on a shield with piles of what are presumably war trophies on either side.

It is not known if the column was originally plain and only benefited from this detailed carving at the direction of Emperor Hadrian after Trajan’s sudden and unexpected death in the year 117. We know Hadrian commissioned the Temple to Trajan and, uniquely for his construction projects in Rome, put his name on the inscription that gives the dedication.  Although the footprint of the temple lies underneath the Palazzo Valentini one column section from its front porch is exposed and is lying on the ground immediately in front of you at the foot of Trajan’s Column.

Including the pedestal, Trajan’s Column is roughly 35 metres (115 feet) tall – the height of which is understood to represent the height of the hill that originally stood here.  The shaft is made from 20 huge Carrara marble drums quarried from what is now northern Tuscany.  Each drum weighs about 32 tons and has a diameter of 3.7 meters (12 feet).

The narrative frieze winds around the shaft 23 times and, if it were laid out, would be 190 meters or 620 feet long.

The frieze has recurring themes of Trajan addressing his troops, making ceremonial sacrifices and then the army setting out on campaign. There are few battle scenes – instead the emphasis is on Roman troops carrying out religious ceremonies and construction works. This choice of storyline may be because Trajan did not become Emperor through his dynasty but from approval by and alignment with the Roman army.  Given this, the architect in charge was likely very aware of what message the monument would be sending to the people of Rome if the celebratory carvings on Trajan’s Column were  seen to be dominated by scenes of conflict and slaughter. In any case, the design contains 2,662 figures in 155 different scenes; Trajan himself appears on the column 58 times.

The carvings include the following key events: the first crossing of the Danube by the Roman legion, Trajan’s voyage up this river, the surrender of the Dacians at the close of the first war, the great sacrifice by the Danube bridge during the second war, the assault on the Dacian capital, and the death of the Dacian king Decebalus.

As background, after losing the Dacian capital although he escaped with his family, Decebalus was hunted down and finally cornered by a detachment of Roman troops. Rather than being captured only to be exhibited, humiliated and likely executed in Rome, Decebalus committed suicide by cutting his own throat.  As the chronology of the column reads from bottom to top this final act of defiance is shown well away from ground level on the penultimate spiral.

Inside the column shaft there is an interior spiral staircase of 185 steps, lit by 40 narrow windows.  This provides access to a viewing platform at the top.

The capital block of Trajan’s Column weighs over 50 tons, which had to be lifted to a height of roughly 34 metres (112 feet).

After his death the Senate agreed to allow the Column to become Trajan’s Tomb and, indeed, there is a rectangular room inside the base that appears to have space for two cremation urns – for Trajan and, perhaps, for his wife, Pompeia Plotina.

Ancient coins indicate preliminary plans to top the column with a statue of a bird, probably an eagle, but after construction, a 14ft bronze statue of Trajan was put in place; unfortunately this statue disappeared in the Middle Ages. The height of the column and size of the statue meant that he was seen to be just standing above all of the surrounding buildings.

The column was originally flanked by two libraries, which may have contained Trajan’s written dispatches from the Dacian Wars. If true then it suggests that the scrolls would be the basis both of the column’s design and its spiraling, sculpted narrative.

On December 4, 1587, the top was crowned by Pope Sixtus V with a bronze figure of St. Peter, which remains to this day.