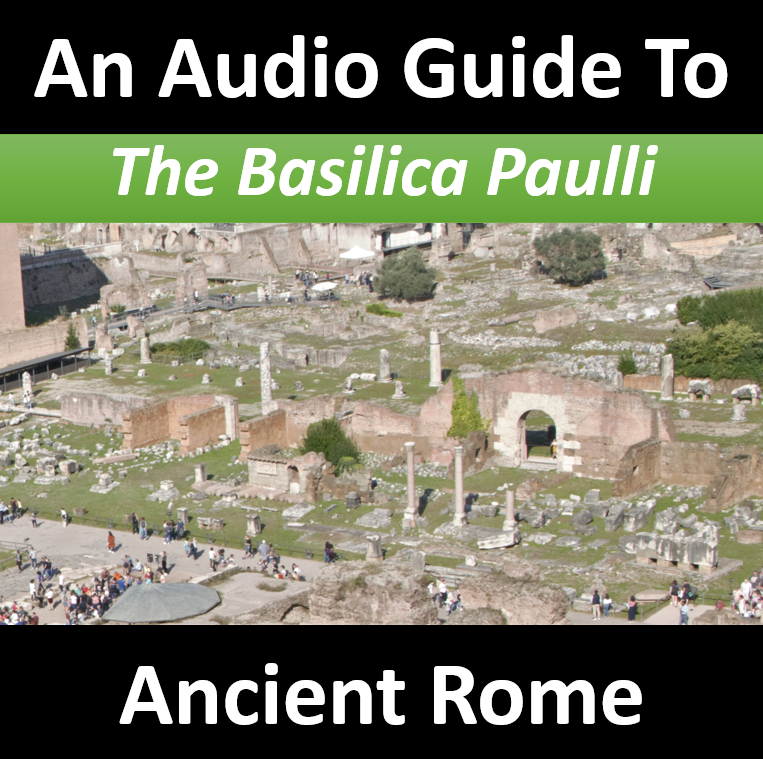 You’re listening to an Audio Guide to Ancient Rome.  This episode is one in a series of short descriptions of monuments in the Roman Forum.  In this episode I’m describing the Basilica Paulli.

Before the Basilica Paulli was built, this location had already served as the site of a basilica commissioned in 179 BCE by consul Marcus Fulvius Nobilior. That building replaced a series of butchers shops that previously occupied the site.  Fulvius didn’t see the project through to completion so, after his death, his colleague and contemporary Marcus Aemilius Lepidus ensured the work was finished. For the next 125 years the building sited here was known as the Basilica Fulvia after its original sponsor.  This first version had a large and roughly rectangular main hall with 34 internal columns defining the inner apse – these were arranged in 4 columns at each end and an additional 13 on each side. Coins from the period show that it was two stories high with columns on the upper floor on the outside. The side of the Basilica that faced the Forum had a portico running along its length also supported by a set of columns.  Under the portico were a set of alcoves that housed a row of new shops – these were referred to as the Tabernae Argentariae Novae which indicates that the shops were actually silversmiths, money changers and bankers.

A substantial refinement and upgrade of the Basilica was made by the Consul Lucius Aemilius Paullus in 55BCE using money he’d received as a bribe from Julius Caesar – the money had been given in return for political support while Caesar was vying for power with Pompey.

On this topic Plutarch wrote:

“Caesar began to lavish gifts upon all the public men out of the riches he had taken from the Gauls; he liberated Curio, the tribune, from his great debts and gave Paulus, then Consul, 1,500 talents with which he built the noble court of justice joining the Forum.”

Unfortunately, 20 years after completion, a fire would start here in the Basilica Paulli that would sweep through the Forum, destroying many of the adjacent buildings – the devastation included the destruction of the Temple and accommodation for the Vestal Virgins.  Fire-damaged fragments of high quality relief carvings from the Basilica have been found showing imagery depicting the foundation of Rome.

Given the scale of the damage and the nature of the buildings destroyed, Emperor Augustus oversaw the work to put things back in order taking the opportunity to refactor the layout and change the use of some of this public infrastructure.

As part of the overhaul, Augustus rebuilt the upper two floors and raised the height of the Basilica, he added stairs and significantly expanded the portico. Although the main part of the building was rededicated as the Basilica Pauli, the new front portico was dedicated to the Emperor’s two grandsons and heirs Gauis and Lucius. This had two orders of arcades with pilasters and Doric semi-columns. Over the upper order an attic was constructed and decorated with carvings of plants and statues of barbarians. Carved remains of a very large white marble panel with a Latin dedication to Lucius have been found close by and can be seen on the southern corner of the Portico (that’s the right side if you facing the Basilica while standing in from the Forum).

The Basilica’s wooden roof, its Portico as well as the facade of the basilica were again completely destroyed by fire when Rome was sacked by Alaric the Visigoth in 410. If you look closely you can still see small green stains of bronze coins on the colored marble floor from the early fifth century that melted by the heat of this fire.

In the year 420 the basilica was rebuilt and given a new floor, the central part of the front porch was replaced by a new portico using columns of pink granite – after archaeological excavation three of these columns were re-erected and stand in a line facing the side of the Temple of Divine Julius.

An earthquake in 847 caused the final collapse of the remaining structure. That said, significant sections of the Basilica remained through to the 1500s as evidenced by artist sketches of that time. Unfortunately, readily-available high quality marble slabs and columns proved too tempting for some and the site was raided to aid in the construction of various renaissance palaces leaving us with the limited remains that you see today.