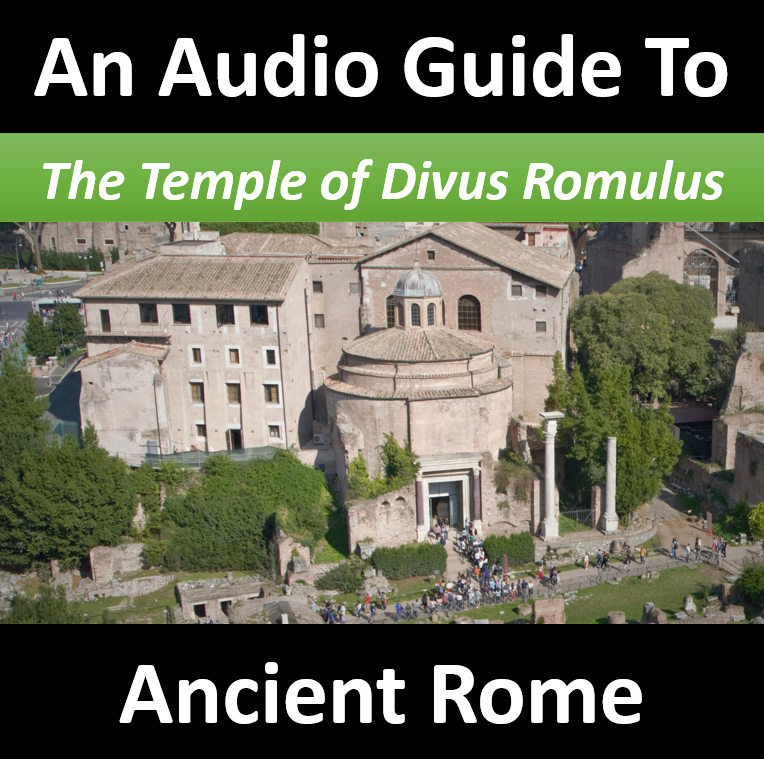 You’re listening to an Audio Guide to Ancient Rome.  This episode is one in a series of short descriptions of monuments in the Roman Forum.  In this episode I’m describing the Temple of Divus Romulus.

The Temple of Divus Romulus is recognizable as a tall round building on the North side of the Via Sacra. From the name you can be forgiven for thinking that this temple is dedicated to Romulus the legendary founder and first king of Rome. Instead the association comes from the theory that this is the temple dedicated to Marcus Aurelius Romulus co-consul who died at the age of 14 in the year 309. His father, the Emperor Maxentius, dedicated a Temple in this area and commissioned a series of commemorative coins which showed a domed shrine with one of the doors ajar, and an eagle on top.

The temple was probably part of a larger rebuilding program undertaken by Maxentius following a disastrous fire in 306. The project was only partially complete when Maxentius died in the Battle of the Milvian Bridge while defending Rome against Emperor Constantine and his invading troops.

What remains is the main entrance to a 4th Century Temple the front of which was originally flanked by two halls who’s remnants are hinted at by the surrounding brickwork and columns. The current street level is much lower than when the temple was constructed so we can see a lot of the exposed footings. Much of the façade has gone but sufficient remains to have a sense of the curving front with niches for 2 statues on each side of the main entrance door. The columns and carvings are mostly repurposed materials from older constructions. For example, the bronze doors and the surrounding marble are third century and Severan. The red porphyry columns that flank these doors are of slightly different lengths and are topped with Falvian-era capitals. Look closely you will see a marble spacer has been used immediately below the left-side capital to compensate for the length differences in the columns. The detailed carving above the door dates to the first century and most likely was carved to be viewed vertically not horizontally.

The temple’s association with Valerius Romulus is ambiguous and largely based on coins minted in the year 307 that appear to show the distinctive shape of this building although there is a big variation in the imagery shown on the coins.  The evidence from the coins and the discovery of a nearby dedication has led scholars to assume that this is Romulus’s temple although It has also been suggested that this could actually be a rebuilding of the temple of “Jupiter Stator” or a temple dedicated to the household gods or Penates. The proximity to the Temple of Vesta means this latter suggestion has some clear merit given that the Penates were closely associated with and worshipped by the Vestal Virgins.

Theodoric the Great, king of the Ostrogoths, and his daughter Amalasuntha donated the adjacent library of the Forum of Peace and a portion of the Temple of Romulus to Pope Felix IV.  The Pope united these buildings to create a basilica devoted to two Arabian Christian brothers and saints, Cosmas and Damian. With its transition to the Christian faith, the building was renamed: Sancti Cosma et Damianus and the church’s apse was decorated with a Roman-Byzantine mosaic that depicted the Second Coming of Christ. The bodies of Saints Mark and Marcellian were transferred to this church, perhaps in the ninth century where they were rediscovered in 1583 during the reign of Pope Gregory XIII.

In 1947, the restorations of the Imperial Forums gave a new structure to the church. The old entrance, through the Temple of Romulus, was closed, and the temple restored to its original forms. Although built a couple of centuries later, the Temple of Romulus is comparable to the Pantheon in terms of its good state of preservation – and, like the Pantheon, this can be attributed to its conversion into a Christian church.