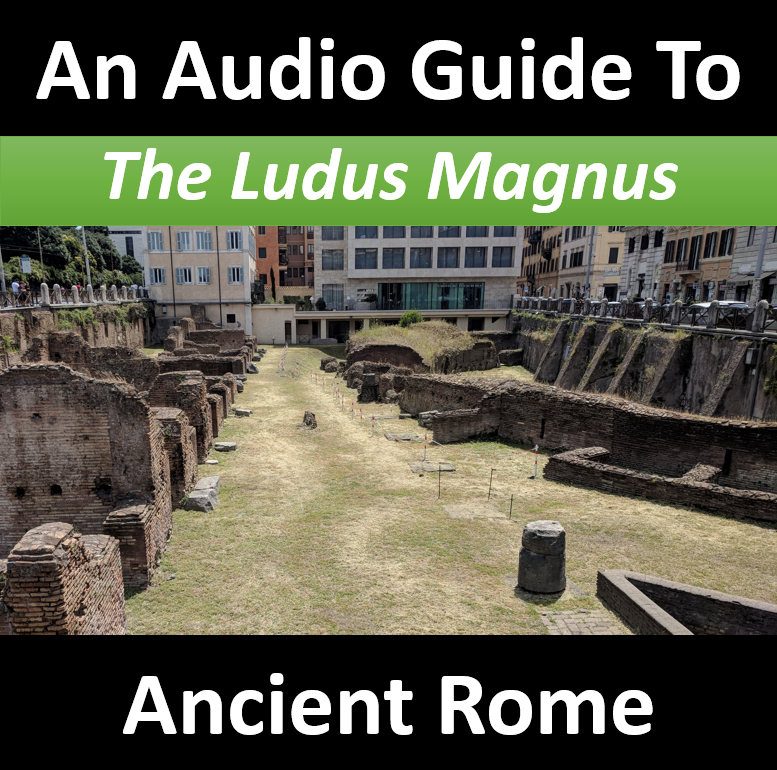 The Ludus Magnus is located immediately east of the Colosseum.

Translated as the ‘big training ground’ this was the largest and most prestigious gladiatorial school and barracks in ancient Rome.  It is one of four centers where gladiators from across the Roman Empire would live, eat, and practice while preparing for their participation in fights.

Fragments of the Severan Marble Plan, an ancient map of Rome engraved on marble slabs, had indicated the existence of the barracks as far back as 1562, but it was not until a chance discovery in 1937 that the Ludus Magnus was uncovered in the shadow of the Colosseum.

The archaeological remains of the school represent less than half of the practice arena and accommodation, while the rest of the structure remains hidden under adjacent street and buildings. What we can see is largely the product of a rebuilding endeavor commissioned by the emperor Trajan in the early second century.

Arriving to the school, gladiators would be separated based on their fighting ‘specialty’ and assigned a doctor as well as placed under the general oversight of a lanista.

It is here at the Ludus Magnus where gladiators would eat, train, and sleep. The training portion of their days was extensive and open to the public. Romans often watched the gladiators practice and we know that the seating provided at this school’s amphitheater accommodated approximately 3,000 spectators.

The other three gladiatorial barracks were known as the Ludus Dacicus, the Ludus Gallicus, and the Ludus Matutinus. The latter appears to have been specialized in animal contests.

The cells of the gladiators on the northern side of the building have been excavated and are visible. This part was connected to the Via Labicana by a monumental entrance. The Greek-Roman historian Herodian states that the emperor-gladiator Commodus used to sleep in one of these cells.

Although we can properly see only the north side, there were three other wings to the barracks and the building seems to have had at least two levels. All in all, there must have been about 130 gladiator cells. We also know that in the four corners between the arena and the surrounding porticoes there were triangular water basins one of which has been rebuilt.

Whilst looking at their practice ground, let’s pause and consider how they dressed, trained and fought.  Unlike many of the movie representations of Gladiators most wore little more than a loin cloth – folded in a particular way but to us would have the appearance of a diaper held in place with a metallic belt.

Gladiators fought in a variety of different of different styles and with different weapons; indeed, the name Gladiator comes from the word ‘Gladius’ which is a type of short sword.  Analysis of these particular swords indicate that they were a combination of iron and steel that allowed them to be both strong at the edges and flexible in the core.

Unlike a Roman soldier’s sword, a gladiators was never held in a scabbard.  They were only given their weapons when they entered the arena and, during any contest, needed fast (or life-saving) access so their swords were retained on a cord that was attached to the pommel and worn around the wrist.

There were many other fighting styles the combination of which added intrigue to the contests – indeed it was expected that different classes of fighter would be battling.  The classes included:

The Thracian – these were given a small shield for defense which was usually held in the left hand, their primary attack weapon was a curved sword. They typically word a brimmed helmet with a  visor and some covering for their left leg and sword-arm.  Effectively this meant they could present a well-defended left side and then pivot to attack with their right.

Another class was the Bestiarius or Venator (hunter) that fought with a shafted weapon such as a spear and wore little armor. The points of the weapons often had barbs or side prongs.  The wooden shaft came from carefully coppiced growth that ensured the integrity of the weapon which had a hardwood core for strength surrounded by younger wood for flexibility.

The Retiarius fought with a trident, a knife, little armor and a net.  This agile and lightweight fighter needed to move quickly to avoid his opponent – evasion and entrapment being his primary methods to overcome his enemy. There is at least one example of a gladiator skull found in Ephesus in Turkey with exact matches to the prong separation of a trident.

Dimachaerus (meaning two swords) we well equipped for offensive and close quarter combat, they were armed with two scimitar blades known as siccae, curved and perfectly designed for slicing attacks on an opponent. We know little about these fighters, but their legacy has still survived to this day as that rarity of a gladiator with no shield or obvious defensive protection. Thought to be highly skilled fighters it is believed that they used the curved weapon to find openings in the armor of their combatant and make effective strikes to their opponents limbs, sides and back.

Lastly in our list are Eques (or calvaryman) – a gladiator that principally fought on horseback and only ever against others in the same class. They were generally armed with a spear, carried a round shield in their left hand and wore a broad-brimmed helmet with two large feather plumes on the top.  If they didn’t manage to spear the opposing rider they dismounted to engage in hand-to-hand combat and would switch to use their gladius.

There are several other classes but, to get a sense of the macabre entertainment factor underlying Roman society, we will lastly mention the Andabata. These were men that fought blindfolded.  Strictly speaking they weren’t gladiators as such and their role was more for comic relief or entertainment. Thought to be criminals, they were given no armour except for a helmet with limited or no visibly together with a gladius to swing widely. Because of their lack of, or very limited visibility, the andabatae were typically herded or managed in the arena by workers. They would keep the andabatae close enough to each other to have a chance of conflict and to ensure the whole spectacle didn’t turn into a hiding or running game.

Let’s focus a little more on the area you’re looking at, the training arena and barracks.

Regular gladiators were taught by an instructor who specialized in a class of fighting. Initially they practiced fighting against upright pieces of wood or ‘stakes’ and this was deemed essential with all recruits enduring lengthy sessions working against these immobile enemies.  While practicing the novice gladiator would use double-weight weapons to make the real thing feel extremely light and easy to wield; the same was used for training the Roman army so it was clearly deemed to be effective.

As a gladiator advanced they would be eventually become a tiro – someone engaging in their first contest.  If they managed to survive this first bought they would become part of the veterani. Beyond simply surviving contests, if they managed to show real skill, be favored by the crowds and the best in the school they might hope to become Primus Palus (or First Stake) – indicating their status by recognition of the stake against which they would practice.

Each gladiatorial contest was overseen by an Editor – the editor acted as adjudicator and had the final say in the outcome of each fight; this might be a senator, the emperor or some other political figure. A match was won by the gladiator who overcame his opponent, or killed him outright. Victors received the palm branch and an award from the editor. An outstanding fighter might receive a laurel crown and money from an appreciative crowd but for anyone originally condemned, ad ludum, their greatest reward was to be set free, symbolized by the gift of a wooden training sword or staff (called a rudis) from the editor.

A gladiator could surrender by raising a finger (ad digitum), in an appeal to the referee to stop the combat and refer to the editor, whose decision would usually rest on the crowd’s response. In the earliest contests, death was considered a righteous penalty for defeat; later, those who fought well might be granted missio (or clemency) at the whim of the crowd or the editor. During the Imperial era, matches advertised as sine missione (without clemency from the sentence of death) suggest that the sparing of a defeated gladiator’s life had become common practice. The contract between editor and his lanista could include compensation for unexpected deaths; this could be fifty times higher than the rental price of the gladiator.  Under Augustus’ rule, the demand for gladiators began to exceed supply, and matches denying clemency were officially banned.

In any event, the final decision of death or life belonged to the editor, who signalled his choice with a gesture described by Roman sources as pollice verso meaning “with a turned thumb” which popular culture interprets as “Thumbs down” however no definitive proof exists as to what gesture this implies. Whether victorious or defeated, a gladiator was bound by oath to accept or implement his editor’s decision. Not all editors chose to go with the crowd, and not all those condemned to death for putting on a poor show chose to submit.

A gladiator who was refused missio was despatched by his opponent. To die well, a gladiator should never ask for mercy, nor cry out.  A “good death” redeemed the gladiator from the dishonourable weakness and passivity of defeat, and provided a noble example to those who watched. Some mosaics show defeated gladiators kneeling in preparation for the moment of death and it is believed they were stabbed through the neck.

The body of a gladiator who had died well was removed with dignity to the arena morgue, where the corpse was stripped of armour, and probably had its throat cut to prove that dead was dead. In contrast, a disgraced fighter would have his body mistreated and dragged from the area.

A gladiator might expect to fight in two or three events annually, and an unknown number would have died in their first match. Few gladiators survived more than 10 contests, though one survived an extraordinary 150;  and another died at 90 years of age, presumably long after retirement.  A natural death following retirement is also likely for three individuals who died at 38, 45, and 48 years respectively.[118] Its likely that the average life expectancy was in the low 20s for most gladiators.