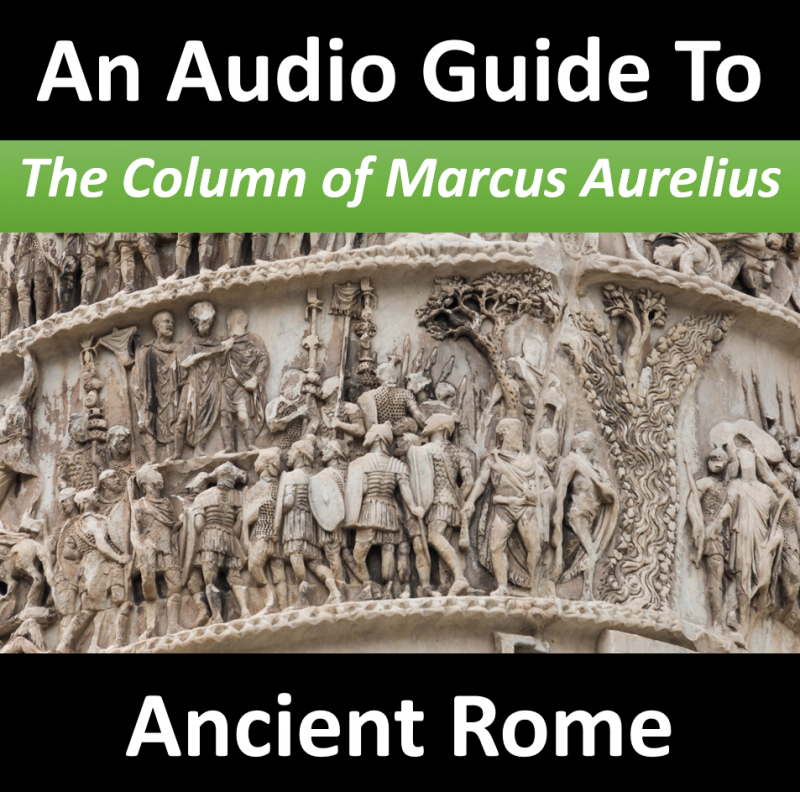 Each episode in this series gives you the history and a short tour of a site in the eternal city in the hope that you can make the most of your visit. For a map of the locations covered go to rome-podcast.com My name is Daron Green and in this episode I’ll be describing The Column of Marcus Aurelius.

This monument celebrates Marcus Aurelius’ two successful military campaigns against tribes north of the Danube in what is modern day Germany. The first campaign ran from the year 172-173 and was waged primarily against the Marcomanni tribe, the second in the following two years was principally against the Sarmatians. For over a decade, these and other German tribes had been orchestrating raids into the provincial territory of Gaul (what we know today as France) and in the area south of the Danube, even going so far as laying siege to Roman settlements and exacting significant defeats against major Roman forces.

In an effort to decisively counter these incursions, in the year 172 under Marcus Aurelius’ command the roman forces crossed the Danube into Marcomannic territory. Although few details are known, his troops were successful in defeating the Marcomanni and their allies as can be inferred by the Emperor adopting the title “Germanicus” and from the creation of new coinage that bore the inscription “Germania capta” (“subjugated Germania”).

The exact date of the commissioning and construction of this celebratory Column is unknown – some suggest that it was built by his son and heir, co-emperor and successor, Commodus, who sought to commemorate the campaigns after his father’s death in the year 180. That said, given how famously vain, self-centered and delusional Commodus was, his notable absence from the carvings despite having taken part in subsequent military actions against the Germanic tribes suggests that the column was likely decreed quickly after the campaigns and around the year 176 and possibly coinciding with Marcus Aurelius triumphal return to Rome.

Echoing the design of Trajan’s column, the central cylindrical shaft is 100 feet high (29.5m) and made of 17 cylindrical blocks. A further 14 blocks in the base, plinth and attic gave a total of 31 massive pieces of marble that originally supported a bronze statue of Marcus Aurelius positioned at the top. Like Trajan’s column, it has a central spiral staircase and is decorated with a spiral frieze that wraps around the column shaft, in this case circling the column twenty-one times and maintaining a very uniform height throughout. The narrative of the carvings start with Roman troops crossing the Danube and then, in contrast to Trajan’s Column that heavily focused on construction works and religious duties undertaken by his roman forces on campaign, this storyline extensively catalogues the brutality of the roman troops and cruelty shown towards the Germanic tribes. Also, this carving is significantly deeper, its details are less subtle and it portrays a much less ambiguous message which might be simply stated as “mess with Rome and you’ll pay the price”. The column was clearly visible from the Via Flaminia, the most important scenes are shown on the side that faces this road such that anyone approaching the city from the north understood the implied message of imperial dominance and intolerance of decent.

Following closely the narrative format established on Trajan’s column, Marcus Aurelius’ two campaigns are recorded reading from the bottom to the top. They are delineated by the inclusion of Victory figures half-way up the column. Starting with the crossing of the Danube, the first campaign follows a fairly conventional storyline of troops marching, imperial speeches, sacrifices to the gods and then the sacking of enemy towns. That said, the inhumanity with which the barbarians are treated in this case can perhaps be understood when one considers that this was not a military force out to annex an area of land with the intent of putting a new governance structure in place. Instead it had been mobilized to enact retribution for previous attacks against the empire and therefore focused primarily on punishment. Rome’s success in Marcus Aurelius’ first campaign is depicted as being delivered, in the end, by a miraculous intervention from the gods. Corroborating this, we understand from historians of the time that a summer’s drought was alleviated in the end by heavy rains that saved the imperial forces. The carvings then close their story of this first campaign with a surrender and a peace arrangement with the enemies of the empire, acts of imperial clemency and various religious sacrifices.

The storyline of the second campaign reads as being even more brutal than the first. The Germanic tribes had broken whatever peace pledges they had made and Marcus Aurelius once again found himself waging war to suppress the empire’s troublesome northern neighbors. This time there would be no hint of clemency or forgiveness from the imperial troops. The story told by the carvings evidences intense fighting, decapitations of prisoners, the unmerciful destruction of villages; slaves, animals and crops were taken in a way that left the land barren and the people with no means of surviving the coming winter – leaving no doubt this was a brutal campaign.

Despite the graphic depiction of humanity at its worst it can be noted that key scenes on the column are framed by a narrative that shows Marcus Aurelius as being of simple and high virtue and, indeed, he was known to be a somewhat unique Emperor for the time as he devoted much of his life to study and philosophy. It seems possible that he found it completely necessary but also totally abhorrent to enact this level of retribution on the peoples and tribes of northern Germany. To better understand this it’s worth pausing and reflecting on the fact that within his lifetime he acquired the reputation of being a ‘philosopher king’ – something that would be a strong part of his legacy. Herodian, a late second, early third century Greek historian wrote the following about the Emperor:

To his subjects he revealed himself as a mild and moderate emperor; he gave audience to those who asked for it and forbade his bodyguard to drive off those who happened to meet him. Alone of the emperors, he gave proof of his learning not by mere words or knowledge of philosophical doctrines but by his blameless character and temperate way of life. His reign thus produced a very large number of intelligent men, for subjects like to imitate the example set by their ruler.

Although the column is sited in its original location, there have been modifications that are worth mentioning. Firstly, if you look closely at the column sections you will see that the cylindrical blocks are no longer fully aligned as they have been displaced by earthquakes – this has happened because the metal pins that originally secured the relative positions of the block layers were removed during the medieval period.

Secondly, despite how complete it appears, the monument is actually considerably taller than you can see as the original ground level is 6-7meters below the pavement that currently surrounds the column. The change came about in the late 1500s when Pope Sixtus V commissioned restoration work. During that time, the visible base of the column was rebuilt, a new and much higher surface level established and, unfortunately, a set of ancient reliefs that surrounded the top of the current square base was chiseled off. Although now missing, we know that, on the east side these reliefs depicted the submission of the Barbarians to the Emperor, the other three sides showed winged victories with festoons and ribbons. The restoration then focused on the column’s shaft as the interior of the spiral staircase and some missing parts of the frieze needed to be repaired. Earthquakes likely toppled and broke the original statue of Marcus Aurelius, his place on the column was taken by a bronze statue of Saint Paul.

Finally, four new inscriptions were positioned at the base of the monument where original dedication text had once been carved. The first of these updated versions (on the west side) states misleadingly that the monument was dedicated by Marcus Aurelius to his predecessor Antoninus Pius. The second inscription (on the south), records the Pope’s restoration efforts. The third statement (on the east) declares the monument’s new Christian role, through the dedication to Saint Paul. Lastly, the north-side inscription establishes that this column is now dedicated to the victory of St. Paul and Christianity over both the Romans and barbarians.