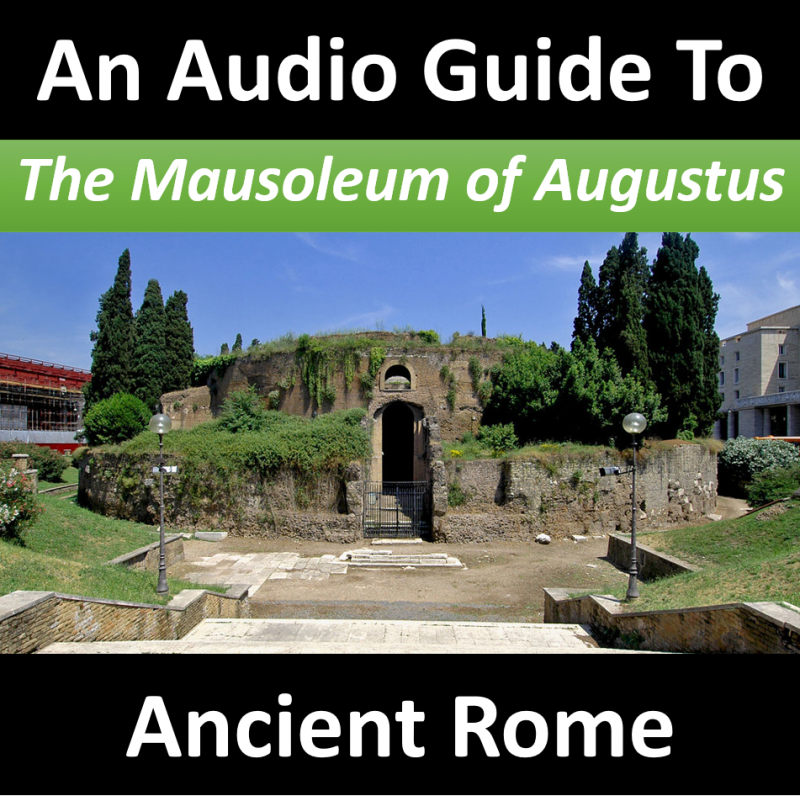 My name is Daron Green and in this episode I’ll be describing The Mausoleum of Augustus.

Augustus started building the mausoleum following his victory over Anthony and Cleopatra in 31 BCE at the naval battle on the west coast of Greece close to the promontory of Actium – his success brought an end to the civil war and meant that Egypt transitioned to be a Roman province.  Augustus’ cremated ashes wouldn’t be placed inside for another 45 years however he would see it serve as the tomb for several imperial family members and close friends during his lifetime.  Today this imperial burial site is surrounded by a combination of somewhat brutal architecture from the 1930s, a church hospital and a modern museum dedicated to Augustus’ transplanted and reconstructed Ara Pacis.  However, when first completed the Mausoleum would have dominated the landscape as it was tall, strategically positioned in a large open area and visible from a long distance, it was also placed close by the Via Flaminia and the Tiber – both major access routes for Rome.

Considering the historical significance of the building, the Mausoleum has suffered (and continues to receive) a surprising level of neglect. At the time of this recording in October 2020 there is still no visitor access despite millions of dollars and multi-year efforts to renovate and re-open the site. That said, given the adjacency of Ara Pacis museum, if you’re already there, it is worth taking a few minutes to look across to the final resting place of the first and perhaps greatest Roman Emperor.

What remains is principally the central core and foundation structure of a huge circular tomb.  The design of the upper tiers is the subject of speculation as there are no remaining original external walls and no contemporary evidence in coins, sketches or sufficiently detailed descriptions to allow a confident reconstruction.  That said, we do have one account by Strabo a Greek geographer and historian who lived in Asia Minor during the transitional period of the Roman Republic into the Roman Empire. Writing about the Campus Martius (Field of Mars) shortly after Augustus’ death he says:

For this reason, in the belief that this place was holiest of all, the Romans have erected in it the tombs of their most illustrious men and women. The most noteworthy is what is called the Mausoleum, a great mound near the river on a lofty foundation of white marble, thickly covered with ever-green trees to the very summit. Now on top is a bronze image of Augustus Caesar; beneath the mound are the tombs of himself and his kinsmen and intimates; behind the mound is a large sacred precinct with wonderful promenades; and in the center of the Campus is the wall (this too of white marble) round his crematorium; the wall is surrounded by a circular iron fence and the space within the wall is planted with black poplars.

The circular mausoleum had a diameter of 300 feet (roughly 89meters) with its entrance to the south – which faces towards the rear of the Chiesa di San Rocco all’Augusteo.  The entrance way led into a roughly 40m wide series of concentric walls that themselves formed three circular corridors.  Each of these corridors had a barrel vault and they surrounded a spiral staircase in the middle of the mausoleum that wound its way up 30meters to the sepulcher where we imagine the ashes of the deceased were placed.  Directly above this area was the pinnacle structure that supported the large statue of Augustus mentioned by Strabo.

In front of the entrance were two bronze plaques attached to pilasters on either side of the main doors.  These contained the text of the Res Gestae a personal account of Augustus’ accomplishments.

If you are visiting the site then consider going to the outside wall of the Ara Pacis museum to the side that faces the Mausoleum.  There you will find a complete copy of this latin text which goes into detail of Augustus’ political career; the offices and political honors that he held. It also lists the numerous offices he refused to take and privileges he declined to be awarded. It emphasizes his financial contributions as well as the land and grain he donated to both the citizens of Italy and the soldiers under his command. Augustus goes out of his way to point out that all these contributions and acts of charity came from his own funds. The text goes on to list his public works and all the gladiatorial spectacles he commissioned.  As you would expect it covers his military deeds and the alliances he forged with other nations. It finishes with a statement that essentially says that all of Rome was grateful for his efforts and that he had achieved all this despite having no more authority than any of his peers. After this first-hand account there’s an appendix that was written in the third person and, as you will hear, was very likely written posthumously. It rather formerly echoes Augustus’ words, confirms the various buildings that he constructed or renovated and acknowledges the vast fortune that the Emperor had spent. Reading this today one can’t help but be struck by the sterile tone of this last part of the text as it appears to be saying ‘We promised him we’d confirm what he did, but that doesn’t mean we have to say we liked him’.

By the time Augustus’ ashes were added to the Mausoleum, those of many of his family and friends had already been accommodated here. His nephew and son-in-law, Marcellus, was the first to be buried having died at the age of 19 in 23 BCE.  His sister Octavia came next in 10BCE followed by his close friend and also son-in-law Agrippa a year later – Agrippa had married Augustus’ daughter Julia, Marcellus’ widow.  Drusus the Elder came next in 9 BCE and then both of Agrippa’s sons and Augustus’ adopted grandsons and heirs to the empire Lucius in the year 2 and Gaius Caesar in the year 4.  Both Tacitus and Cassius Dio suggest foul play may have been involved in the case of these last two and, specifically, that Gaius’s step grandmother Livia may have had a hand in their deaths. Livia’s presumed motive may have been to orchestrate the accession of her own son Tiberius as heir to Augustus. In terms of other family members after Augustus, his daughter Julia, whose adulterous life of scandal had been such an embarrassment to her father, was excluded from burial in the Mausoleum, as was her daughter, Julia the Younger. Later would be added the ashes of Drusus (Tiberius’ only child), Livia (Augustus’ wife), Tiberius (Livia’s son by her first husband), Agrippina (the daughter of Agrippa and Julia, and the mother of Caligula) and her husband Germanicus, Nero and another Drusus (these were the brothers of Caligula), and Poppaea (the wife of Nero) as was Emperor Nerva, father of Trajan, in the year 96.

Sometime before the fourth century the entrance to the Mausoleum gained two plain obelisks of red Aswan granite.  These are gone from the site and are now positioned in the Piazza del Quirinale and in front of Basilica di Santa Maria Maggiore. In the Middle Ages, the Mausoleum was converted into a fortress and later a site for formal gardens. In the Eighteenth Century, the area inside the upper terrace was used for bullfights, then for circus and theatrical performances, and in the Twentieth Century, before restoration began it was used as a venue for concerts.  Plans to re-open the site remain unclear given the slow progress of the renovation – the latest target date of spring 2020 has clearly not been met.

Image:  “Rome. Mausoleum of Augustus.” by Sergey Sosnovskiy is licensed under CC BY-SA 2.0