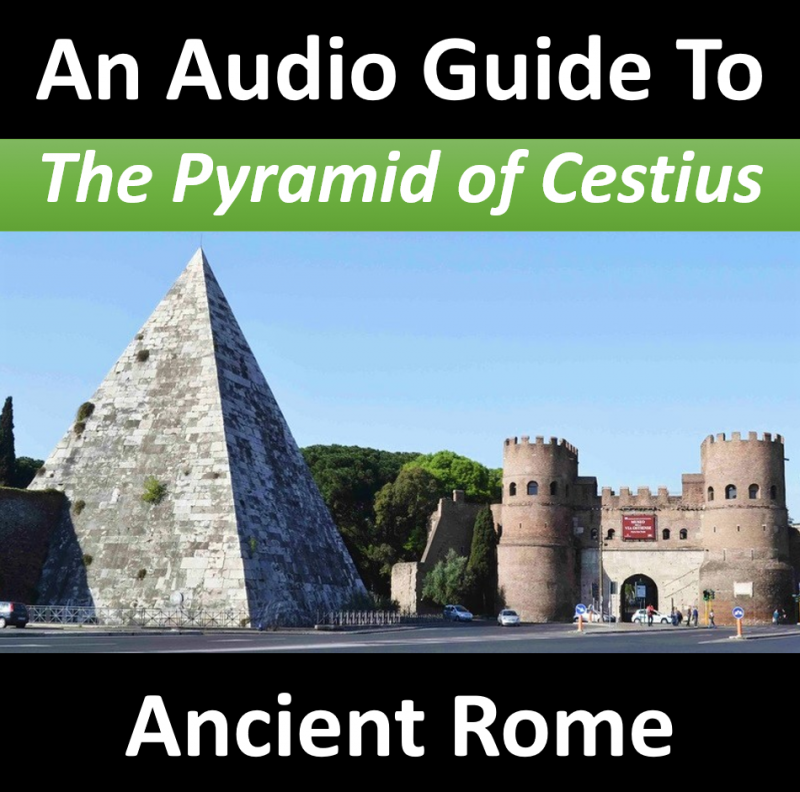 Note that access to the interior of the pyramid is limited to just a couple of days each month and will require you booking tickets in advance that said, it is worth travelling to see this quite remarkable monument even if you don’t go inside.

The Pyramid of Cestius was built during the reign of the emperor Augustus, probably between 18 and 12 BCE. It’s surface is white Carrara marble and the tip is exactly 100 Roman feet (30 meters) high.

At the time of its construction, Ancient Rome was heavily influenced by Egyptian architecture after the conquest of Egypt by Augustus in 30BCE. Obelisks and other monuments where being imported from this new province to decorate Rome’s buildings, piazzas and its major sporting venues. Despite this fashion, only two pyramids are known to have been built in Rome and the only one left standing is the Pyramid of Cestius.

The city’s other pyramid, known as Meta Romuli, would be built some time later on the other side of the city between Hadrian’s Mausoleum and Nero’s circus or, using reference points we can see today, between the Castel Sant’Angelo and what is now the Vatican. The materials from this now lost pyramid were taken in the 15th century to form the steps of St. Peter’s Basilica.
The one remaining pyramid was constructed as the burial chamber for the Roman magistrate, Caius Cestius it was sited in countryside well beyond the city limits and positioned at a fork in the road.

Caius Cestius was a tribune, a plebian and member of the religious corporation of the Septemviri Epulonum. The epulones formed one of the four core religious organizations of ancient Roman priests. For completeness, the others were the College of Pontiffs, the Augurs and the quindecimviri sacris faciundis. The Epulones were tasked with arranging feasts and public banquets at festivals and games, duties that had originally belonged to the pontiffs. Initially there were only three but later their number was increased to seven; hence they were known as the septemviri epulonum, “seven men of the epulones”.

In his will, Cestius asked his heirs to construct a tomb in the form of a pyramid and, if that wasn’t an odd challenge enough, he required that the project be completed within 330 days.

Cestius’ pyramid was constructed of brick and cement, and covered in white marble. It’s sides rise at a more extreme angle than the Egyptian pyramids that likely inspired it, a difference that could have been the result of inaccurate information sent back to Rome by its soldiers. Alternatively, Roman builders could simply have chosen to build something more striking and only possible because of their use of concrete, or they could have drawn inspiration from the steeper Nubian pyramids in present-day Sudan.

On the east and west sides, about halfway up, is the inscription recording the names and titles of Cestius, and below, on the east side only, more text that tells the circumstances of the erection of the monument.

The complete inscription on this side reads:

Gaius Cestius Epulo, son of Lucius, of the Poblilian district, praetor, tribune of the people, official of the public banquets. According to his will, this work was completed in three hundred and thirty days; it was executed by his heirs L. Pontus Mela, son of Publius, of the Claudian district, and his freedman Pothus.

In 1660, two bases of statues were found on the west side and each bore a similar inscription recording their erection by the heirs of Cestius.

In the third century A.D., the Pyramid was incorporated into a system of walls built on the orders of Emperor Aurelian and close by is the heavily fortified city gate, the Porta Ostiensis. In the seventeenth century, when a tunnel was added to these defense works, the funerary chamber of the pyramid was discovered. Unfortunately grave robbers had already looted any remains from inside however the central chamber contained wall paintings in what was later called the Third Pompeian style. Pope Alexander VII ordered restorations, which are also commemorated in an inscription on the side of the pyramid.

In gratitude for good trading relations, in 2011, the Japanese clothing company Tsusho LTD, announced its intention to help the Italian government pay for an ambitious cleanup and renovation of the Pyramid.

Visitors access the interior via a narrow corridor that leads to the central burial chamber. The walls of Cestius’ final resting place still have some simple pictures similar to the frescoes preserved at Pompeii. No one knows what happened to the urn containing Caius Cestius’ remains, but there is a tunnel going upward from inside the burial chamber, fueling theories that medieval grave-robbers dug their way down into the tomb.

The pyramid of Cestius has left an odd legacy in terms of its influence on Italian renaissance art. As noted, compared to most Egyptian pyramids, the Pyramid of Cestius is much more steep-sided and therefore more pointed at its top. This explains why in the Middle Ages and Renaissance, pictures of ancient Egypt also contained very pointed monuments as the only place where most European artists could see a pyramid, was in Rome, and Cestius’ mausoleum misled them in terms of what dimensions to use. A famous mosaic in the Basilica di San Marco in Venice includes a scene from the Biblical story of Joseph in Egypt, it shows the pyramids in the background and, although the artist has endeavored to make them look Egyptian, the proportions are such that they are clearly based on the steep-sided Pyramid of Cestius.