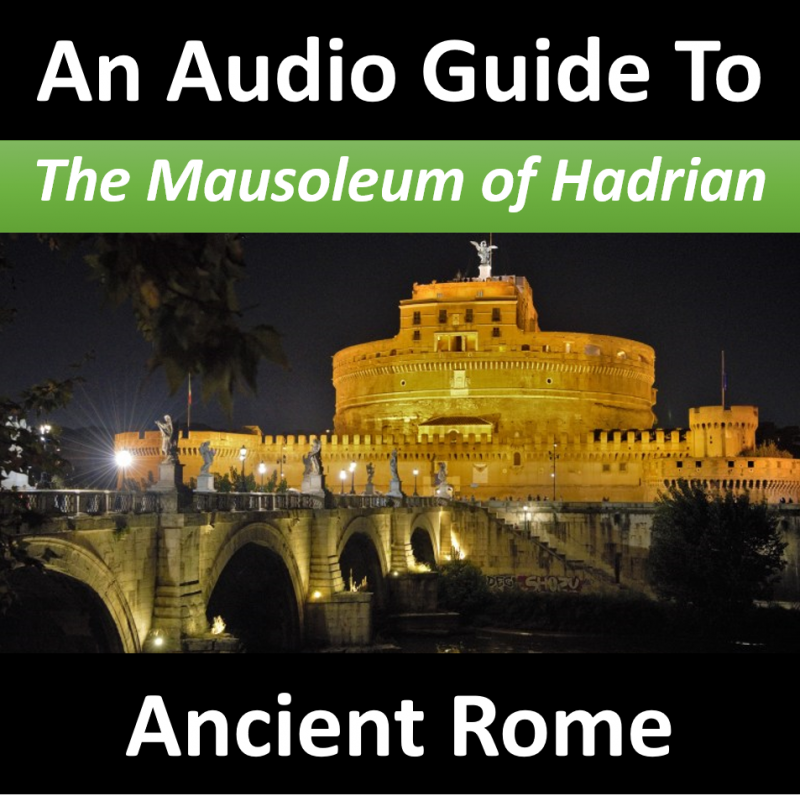 You’re listening to an Audio Guide to Ancient Rome. Each episode in this series gives you the history and a short tour of a site in the eternal city in the hope that you can make the most of your visit. For a map of the locations covered go to rome-podcast.com

My name is Daron Green and in this episode I’ll be describing the Mausoleum of Hadrian.

If you’re looking on a map for Hadrian’s Mausoleum then you may well not locate it as its name, purpose, shape and context has changed radically over the past 1900 years. Today it is more commonly known as the Castel Sant’Angelo however the core of this building was originally constructed as a mausoleum for the Roman Emperor Hadrian and his family. The building was later used by popes as a fortress and castle, and is now a museum with pleasant cafés and impressive panoramic views of Rome that take in the Tiber river and the Vatican.

It was common for mausoleums to be home for the ashes of many family members and Hadrian needed to build his own in part because the nearby mausoleum of Augustus was already full.

In a show of feigned modesty, Hadrian was careful to commission a building that did not exceed the diameter of Augustus’ however it was quite significantly taller. Looking today at the Castle Sant’Angelo we see a structure dominated by defensive walls, corner tower fortifications and religious statues that were all built and repeatedly updated over the past 600 years. That said, there are echoes of the original mausoleum design in what we see. Instead of a large outer defensive wall there was originally a low square outer apron of stout roughly 2 meter high marble columns topped with bronze statues of peacocks. Inside this was a large square base upon which sat a tiered circular central building – the exact exterior design is unknown but various key features are understood or can be guessed at based on remaining iconography and the surviving core structures.

Unlike today, there was no fortified wall and no towers at the corners. Instead, around the top perimeter of the base were statues of men and horses – perhaps 10-12 on each side. The entrance to the Mausoleum would have been through large doors that faced the purpose built bridge constructed to connect Hadrian’s tomb to the field of Mars across the river. Once through the doors a visitor found themselves in a square entrance hall with an opening to the right that defined the start of an interior circular ramp that made a huge anticlockwise spiral up through the core structure. This terminated in an antechamber directly above the entrance hall. Four huge skylights were built at the cardinal points into the ceiling of the circular ramp to provide light into the passageway.

The antechamber gave access to the heart of the structure – the central tomb; it also had a set of stairs that led up to a higher level. More specifically, the stairs led to a large garden area with perhaps a grove of laurel trees – something shared with the general design of Augustus’ Mausoleum. At the center of this landscaped and tree-lined area was a domed tower capped by a massive statue of Hadrian driving a quadriga chariot.

Cassius wrote of this and remarked that:

After Hadrian’s death there was erected to him a huge equestrian statue representing him with a four-horse chariot. It was so large that the bulkiest man could walk through the eye of each horse, yet because of the extreme height of the foundation persons passing along on the ground below believe that the horses themselves as well as Hadrian are very small.

Hadrian’s last few years were somewhat stressful as he suffered from both familial conflict and a protracted illness during which he was prevented from suicide by his physicians on several occasions. He died on 10 July in the year 138 at his villa in Baiae on the northwest shore of the Gulf of Naples. He was 62 and had reigned for 21 years; his successor was his recently adopted son Antoninus Pius.

Hadrian was buried first at Puteoli, near Baiae, on an estate that had once belonged to Cicero. Later his remains were transferred to Rome where he was reburied close by the almost-complete mausoleum. Once the tomb was finished, his body was cremated, and his ashes placed together with those of his wife Vibia Sabina and his first adopted son, Lucius Aelius, who had died the same year. The Senate had been reluctant to grant Hadrian divine honors; but Antoninus persuaded them by threatening to refuse the position of Emperor.
The contents of the tomb and most of the decorations were lost over the following centuries as the building became first a military fortress and then integrated into the Aurelian Walls. Despite its increasing fortification the city was successfully sacked by the Visigoths in 410 during which time the mausoleum’s urns and ashes were scattered.

Subsequently, while preparing for a siege by Goths some 120 years later, deep trenches were dug on the outside of the castle’s defensive walls. Even with this added protection, the castle became the site of some of the most intense fighting with the result that the original mausoleum decorative bronze and stone statues were destroyed by its defenders so that they be used as missiles to repel the gothic forces.

Over later centuries popes continued the fortification of the castle and connected it to St Peter’s Basilica by building a covered fortified corridor called Il Passetto di Borgo. The Papal state also used Sant’Angelo as a prison and executions were performed in a small inner courtyard.

The castle successfully served as the papal refuge for Pope Clement VII during Charles V’s Sack of Rome in 1527.
Then, in 1536 Raffaello da Montelupo was commissioned to carve a marble statue of Saint Michael to be positioned on the top of the castle. The statue celebrated the Saint sheathing his sword after defeating a plague the had ravaged the city nearly 1,000 years earlier.

In 1753, Montelupo’s statue was recreated in bronze. This second statue, by Flemish artist Verschaffelt, is still in place and Montelupo’s can be seen in an open court in the interior of the Castle.

I hope you’ve found this episode useful. For others in the series go to rome-podcast.com where you will find a map of the locations and links to all the episodes.

Also, if you get chance please do give feedback and rate the series on your preferred podcast app. Your ratings and comments will help me tune and update the content.