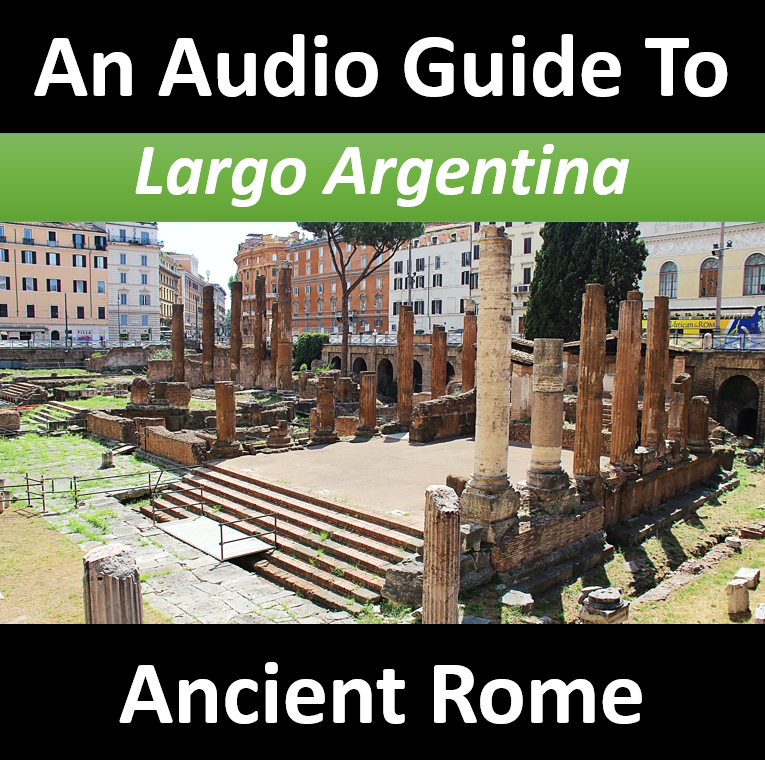 Largo Argentina is an exposed cluster of four temples to the south of the Pantheon and east of the Campo De’ Fiori. Today these sit in the middle of a large square and next to a bustling set of road intersections but they were originally part of a much larger temple complex in the field of Mars. Hundreds of years after the first of the four was constructed they were joined on their west by Pompey’s grand Theater.

It is not known for certain which gods should be associated with each temple so traditionally they are referred to simply by the letters A to D. They run alphabetically with rectangular Temple A on the north side closest to the wide road intersection, circular Temple B is next, continuing along we have the two other rectangular temples C and then D.

Excavations and soundings indicated that versions of the 3 rectangular Temples were in place as far back as 150 BCE. Each of these was oriented east-west with the entrance steps facing East. Before Temple B was built it appears that there was an earlier and simpler open-roofed religious space likely with a modest altar in the middle – this was thought to be associated with the ancient cult of Juno Caprotina.

In the first century BCE all four temples were in position together with a set of sacrificial altars immediately in front of their entrance steps. Although there is not 100% certainty, the following gods have been linked to each Temple.

Temple A has been associated with Juturna the goddess of fountains, wells and springs. Legend says that Jupiter turned her into a water nymph – a Naiad – and gave her a sacred well in Lavinium as well as another one near the temple to Vesta in the Roman Forum. There is some irony here as the raised level of Temple A’s platform was likely the result of a significant modifications following major flooding in this area in the year 19 BCE. It is believed that this is the temple dedicated at the end of the first Punic War (241 BCE) by Consul Gaius Lutatius Catulus to celebrate his victory on the Aegadian Islands off Trapani. This temple has more surviving structure largely because it was converted into the Church of San Nicola Dei Cesarini in 1132 – the two apses at the rear of the church are still identifiable. Although originally associated with the powerful Cesarini family, the church had also been called San Nicola de Calcarariis as for centuries workshops here turned marble into mortar.

Scholars have more confidence in the association of Temple B with the Roman goddess Fortuna given that parts of a colossal statue were found close by; the pieces were her feet, right hand and a relatively complete head and neck. The statue would have been roughly 8m tall and made from marble and bronze. Fortuna was the goddess of fortune and the personification of luck in Roman religion; in statues she was typically shown holding a large horn of plenty. As well as the recovered fragments, we see remains of the substantial base that would have been needed to support her statue. At each side of Temple B’s steps there are rectangular plinths which supported other smaller statues. In addition to the physical evidence, written accounts document that Lutatius Catulus vowed to build and dedicate a Temple to Fortuna Huiusce Diei (from which we might associate it more specifically as the goddess of Today’s Fortune). He made this vow following his victory against a Germanic tribe at the battle of Vercellae in the year 101 BCE and, importantly, the temple he built is known to be circular. Originally this Temple had 18 Corinthian columns with tufa shafts and travertine bases and capitals, it was covered in white stucco to make them look like everything was made out of the much more expensive marble. These columns were free-standing outside a small cella. In its first 200 years the Temple saw various modifications with the originally open-column central area being walled-up with slabs of tufa, the podium was extended and the floor level raised, a new staircase was built, there was also a new marble covered altar and a new porch.

Next along we have Temple C. This is the most ancient of this set of four, dating back to the 4th or 3rd century BCE. It is generally understood to be dedicated to Feronia, an ancient goddess representing wildlife, fertility, health, and abundance. As the goddess who granted freedom to slaves or civil rights to the most humble part of society, she was especially honored by plebeians and freedmen. The black and white mosaic of the inner temple cella dates to substantial rebuilding and restoration work commissioned by Emperor Domitian following a major fire in the year 80.

There are various competing theories for the designation of Temple D’s god however it has been well argued that it should be associated with Lares Permarini, the ancient protectors of navigation. More broadly, the Lares were a group of gods that protected the people, the home and certain human activities; the Lares compitales protected crossings, the Lares Praestites protected the border between the inhabited and uninhabited lands and Lares Permarini protected ships, shipping routes and sailors. They were expected to look out for the Roman crews when they were away from Rome and their effigies or small statues, usually earthenware, were placed on the prow of the ship in a shrine called the lararium. Censor Marcus Aemilius Lepidus was responsible for a temple’s construction in the year 179 BCE after it had been vowed 11 years earlier by Lucius Aemilius Regillus during a naval battle against the Seleucid. Such a dedication was recorded on an inscription at the entrance door for Temple D.

This all said, a 2 blocks walk away from the Largo Argentina eastwards along the Via Delle Botteghe Oscure on the North side of the street we can see another excavated area (this is on your left as you walk along the street). These remains were discovered during a 1930s urban renewal project and two columns were re-erected in the 1950s on part of the temple podium. The stone is travertine but faced with stucco to imitate marble column drums. A fragment from the marble Forma Urbis map of Rome indicates that the temple was 40 X 27 meters. Used for grain distribution it was situated in a porticoed piazza that has been identified with the Porticus Minucia (110 BCE) rebuilt after the year 80 fire. This structure may have been the Temple of the Nymphs but it also competes with Temple D as a candidate for the Temple of the Lares Permarini.

One thing you may be wondering is why the 4 temples clustered together are referred to Largo Argentina. The name of the square comes from the Torre Argentina, which takes its name from the city of Strasbourg whose Latin name was Argentoratum. In 1503, the Pope’s Master of Ceremonies, Johannes Burckardt, who came from Strasbourg and was known as “Argentinus” built a palace with a connected tower a block to the west; his tower has since been taken down but name Largo Argentina has remained.

The tower in the square is the medieval Torre del Papito (or the “Little Pope’s Tower”), attributed by tradition to Antipope Anacletus II Pierleoni.