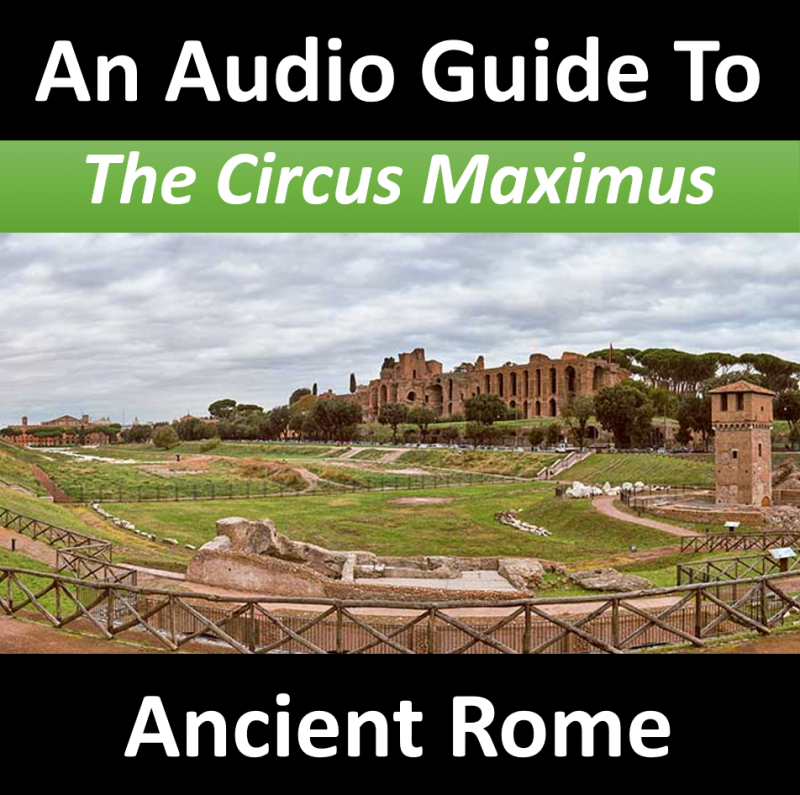 Each episode in this series gives you the history and a short tour of a site in the eternal city in the hope that you can make the most of your visit.  For a map of the locations covered go to rome-podcast.com My name is Daron Green and in this episode I’ll be describing the The Circus Maximus.

Legend has it that the Circus Maximus was founded by the early kings of Rome in the 6th Century BCE. It is undoubtedly the oldest and was by far the largest public sports venue of ancient Rome.

It occupies most of the valley between the Aventine and Palatine hills, and served Rome’s chariot-racing stadium for over 1,000 years.
That said, use of the Circus was not limited to chariot racing, it also served as a venue for public games or Ludi connected to Roman religious festivals. Ludi were typically sponsored by leading Romans or the Roman state for the benefit of the Roman people and gods.

The earliest triumphal ludi at the Circus were vowed by Tarquin the Proud for his victory over Pometia and dedicated to Jupiter, the god of the sky,

The race track is roughly 550m long and 80m wide. The spectator stands are 30m deep and surround almost the entire perimeter giving, in the first century, a maximum capacity was reported to be roughly 250,000 spectators although this may include people sitting on the sides of the adjacent hills – in any case this is over four times more people than the maximum capacity of the Colosseum.
The starting gates for the chariot races were at the far north western end of the stadium. These were arranged in an arc to ensure that each chariot was the same distance from the break point into the first length of the circus. The archaeologic remains show 12 gates – each of which would have had its own spring-loaded doors. Each gate would have housed one chariot pulled by four horses giving a total of 48 horses in the race. The gates were opened probably using mechanisms similar to that for a cross-bow with a single gate release triggering them to spring open simultaneously.

Given the number of chariots and horses, when the race began, it would have resembled a stampede. The crowded field meant that one of the most frequent risks on the racetrack was a “shipwreck,” as the Romans called them — when chariots would tumble and crash on the track likely both injuring their occupants and creating dangerous roadblocks for the remaining racers.

Each race was made up of 7 laps – for several hundred years these were counted using large egg-shapes mounted in the median barrier (or Euripus). In 33 BC, an additional system of large bronze dolphin-shaped lap counters was added. The Euripus also contained water troughs from which attendants from the racing teams could scoop water to splash onto the racing horses to cool them down.

The charioteers taking part in the race enjoyed enormous popularity being the superstars of their day. By far the most famous and successful of these raced during the reigns of Hadrian and Antoninus Pius in the 2nd century. This was Gaius Appuleius Diocles. Records show that he won 1,462 of the 4,257 four-horse races he competed in, and was placed in an additional 1,438 races (mostly finishing in second place). The ‘Champion of Charioteers’ is one of the best-documented ancient athletes, due to his popularity and success at the Circus Maximus. Any race with Diocles quickly became the featured event of the day. As well as being extremely an successful charioteer, he was also noted for owning a very rare ducenarius, a horse that had won at least 200 races.

He had an unusually long career, racing for 24 years and representing three of the four most famous chariot racing stables in Rome, which were known by the racing colors worn by their charioteers (Reds, Whites, Blues, and Greens). He began with the Whites at the age of 18; after six years, he switched to the Greens for three years, and then raced 15 years for the Reds before retiring at the age of 42. His long career and success made him fantastically wealthy – more wealthy than most of the senators.

As well as serving as the dividing partition and lap counter, the central Euripus was richly decorated with shrines, obelisks and statues raised on tall columns. These included dedications to Festus, Delphini, Victory, a statue of Seia, and an altar each to Luna, Mercury, Venus, Mars, Jupiter, Saturn and the Sun as well as various other statues.

In prime position in middle of the Euripus was the first Egyptian Obelisk brought to Rome. This was placed at the direction of emperor Augustus in 10 BCE to remind spectators of his successful annexation of Egypt as a Roman province. It, and a similar obelisk placed on the Campus Martius close to the Ara Pacis, advertised Augustus’s political supremacy.

For Augustus, it was important that the inscription at the base of the Obelisk made two important points. Firstly, it reminded everyone of his major military and political victory; Antony and Cleopatra had been defeated during this conflict and decades of civil war brought to an end. In addition, Egypt remained the personal estate of Augustus, who retained the right to appoint its governor independently from the Senate – this was important because it meant he had control over Egypt’s grain shipments where were a major source of food for the people of Rome.

The final line of the inscription states that Augustus “gave this to Sol as a gift” which demonstrated his piety to the gods and sensitivity to tradition as the Circus Maximus had long been associated with the sky and, in particular, the sun-god, Sol. Although no longer in position in the Circus, Augustus’ obelisk together with its original base can still be seen in Rome in the center of the Piazza del Popolo.

Emperor Constatius II erected an even larger obelisk on the Euripus – in this case at the Western end. His was to be the largest ever brought to Rome and stands today outside the Archbasilica of Saint John Lateran.

To give some sense of the popularity of the circus, during Augustus’s time, each year seventy-seven days were given over to public games; chariot races were run on seventeen of these. There were usually ten or twelve races a day, until Caligula doubled that number and, from the end of his reign, twenty-four races became typical. That said, there are accounts of Domitian holding one hundred races a day (but these were limited to 5 laps) and, never to be outdone, Emperor Commodus ran thirty races in just two hours one afternoon in the year 192.

Roughly three-quarters of the way along the track away from the starting gates the spectator seating was interrupted by two structures: on the northern side was the Pulvinar, a raised platform for the watching sponsor and other dignitaries and, roughly opposite, on the Southern side, was the Aedes Solis.

Aedes Solis was an ancient shrine that likely housed a statue of Sol probably shown driving a chariot. The shrine is thought to be represented on some relief carvings of the circus and on coins Emporer Philippus Arabus of the mid third century. At the opposite end from the starting gates is the ‘turning point’. This was the most popular area of seating as it was associated with the largest number of ‘ship wrecks’. That area of the spectator stands was rebuilt in the year 81 and replaced by a triumphal arch to commemorate the conquest of Judea by Titus. The arch was posthumously dedicated to Titus by his brother Emperor Domitian. The arch is no longer standing but its form has been identified through its depiction on coins from the Trajanic period, as well as in some wonderfully detailed mosaics on the island of Sicily at the Piazza Amerina. From these we know that the arch had three bays (one large, central bay, with a smaller one to each side), between which stand Corinthian capitals and bases. The inscription stated that the arch has been dedicated to Titus because he had succeeded in subduing the Jewish people and destroying the city of Jerusalem. Like the Arch of Titus in the Roman Forum and the inscription on the Colosseum, this Arch also served as a physical reminder of the achievements of the Flavian dynasty and the scale of destruction brought upon the capital city of Judea.

Clearly, surviving for 1,000 years meant that there were various other upgrades, repair and modifications to the Circus. In 50BCE Julius Caesar extended the seating tiers to run almost the entire circuit of the track. His successor Augustus repaired the circus after a fire, gifted the Obelisk and built the Pulvinar. Given its location at the bottom of a valley, the site remained prone to flooding until Emperor Claudius made drainage and flood prevention improvements there.

That said, fires in the crowded, wooden perimeter workshops and bleachers were a far greater danger than flooding. One such fire in the year 36 seems to have started in a basket-maker’s workshop under the stands, on the Aventine side; the emperor Tiberius compensated various small businesses there for their losses.

In the year 64, during Nero’s reign, another fire broke out at the semi-circular end of the Circus, swept through the stands and shops, and destroyed much of the city. Games and festivals continued at the Circus, which was rebuilt over several years to the same footprint and design.

After a number of other fires Emperor Trajan undertook major restoration work and upgraded the seating to be marble in the first tier as well as special seating for Senators and Equites. He also upgraded the Pulvinar to be a more fitting place for the Emperor to both watch the race and be seen by the people of Rome.

Some repairs were unforeseen and extensive, such as those carried out in Diocletian’s reign, after the collapse of a seating section killed some 13,000 people.

Today the shape and size of the Circus Maximus can be clearly seen with some exposed brickwork mostly of the seating substructure at the turning point. It should be noted that the original track is roughly nine meters below the current ground surface which, when one considers the height of the remaining banking, gives some sense of the huge shape and scale of the stadium. Also, don’t be fooled by the Torre della Moletta (Tower of the Little Mill) that sits inside the turning point end of the track. It is was built by the Fragipane family in the middle ages on the site of an earlier water mill.

The Circus is now a park that is occasionally used for concerts, small-scale sporting activities and, in the event that Italy wins the world cup, major public celebrations.