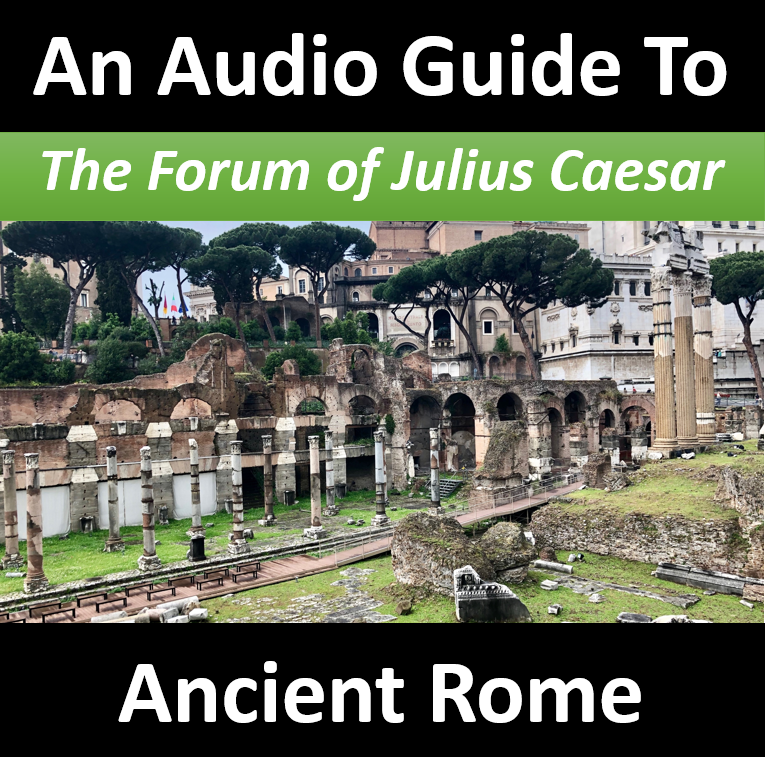 You’re listening to an Audio Guide to Ancient Rome. This episode is one in a series of short descriptions of monuments in the Roman Forum. In this episode I’m describing the Forum of Julius Caesar.

This area, at the side of the Capitoline Hill, was the border between two of the ancient tribes and a site for burials roughly 3,000 years ago. Archaeological evidence shows that at times there were also huts, a forge and in the 6th Century BCE, it was the site of a large house – potentially that of a king.

The major redevelopment of this site happened after Julius Caesar prevailed in his civil war with Pompey and reclaimed his position as Consul. He then began a major overhaul of the Roman Forum replacing some of its older buildings and enlarging it into this area behind the Curia. Acquiring the buildings, land and levelling the whole site would have been an extremely expensive undertaking but Caesar had amassed a huge fortune from the spoils of his campaigns across Europe and, in particular, in Gaul. Excavations have revealed that the space provided a vast open colonnaded court that focused attention on the Temple of Genetrix that stood on the north western short side of the square. The temple had been promised by Caesar the evening before the battle of Pharsalus in 48 BCE as his forces prepared to engage directly with Pompey’s troops. Caesar’s promise was made in a late attempt to win favor with Pompey’s preferred deity, Venus Victrix. Although significantly outnumbered, Caesar won the battle but failed to capture Pompey who fled to Egypt only to be subsequently executed by the young Pharaoh Ptolemy. In the end Caesar didn’t keep his word and instead dedicated the building to the Julian family’s preferred deity Venus Genetrix.

Never one to miss an opportunity for self promotion, in the center of this courtyard was a military equestrian statue of Caesar in the style of Alexander the Great riding Bucephalus. It was likely twice normal size.

This new Forum was dedicated to Caesar in September 46 BCE to celebrate his combined victories over Gaul, Egypt, northern Africa and The Kingdom of Pontus (which is part of what we now know as Turkey).

Creating this space sent some very clear signals to the citizens and leaders of Rome. Julius Caesar was reshaping the infrastructure at the heart of the republic with his new Forum decadently extending the old. It also reminded everyone of the close association between the Julian family and the goddess Venus Genetrix from whom Caesar claimed to be descended. Caesar liked to have the senators meet him in this new Temple – something which would intensely bristled them and ultimately contributed to them seeing him behave more as a king than a consul.

Caesar’s Forum was a large U-shaped double colonnade that nestled into the Capitoline hill. The porticos formed by the columns helped define alcoves that extended into the side of the hill. Initially these served as a series of offices and shops and one provided a ramp up to a second floor and the adjacent hilltop. The Forum’s external colonnade columns were probably Corinthian and the internal likely Ionic.
Caesar planned to extend his forum to the south east connecting it with the new Senate meeting – this work was authorized by the senate in January of 44BC just a couple of months before they orchestrated his assassination. The expansion of the Forum was subsequently taken on by his successor, Emperor Augustus.

Then, following a disastrous cremation which ended-up burning down the Curia Julia, in 29 BCE Augustus repaired the Curia, Caesar’s Forum and also open-up access through a series of porticos on the north east side of the Forum’s colonnade.
Many years later, Emperor Trajan’s redevelopment of the surrounding area led to major changes and remodeling of Caesar’s forum. The second floor was replaced, many of the alcoves on the upper west side were converted into a large semi-circular (and quite lavish) public latrine, the Temple of Venus Genetrix was rebuilt and the podium on which it stands was extended. The forum and temple were rededicated in the year 113.

Fire would again strike Caesar’s Forum, the Temple and a number of other buildings in the area in the year 283. Reconstruction fell to Emperor’s Diocletian and Maximian who substantially remodeled the South West halls and arcade.

Despite repeated repairs, the Temple of Venus Genetrix maintained a classical design similar to others close by. The temple entrance was via two narrow side stairs that led to an intermediate level and orators platform at the front. From there, a wide set of central steps led through an 8 column portico that gave access to the main cella. At the back of the cella facing the front doors would have been a giant statue of the goddess. The temple also housed other works of art including a number of statues of Caesar posing in military uniform and, famously, a gilded statue of Caesar’s lover Cleopatra.

The footprint of Caesar’s forum is relatively easy to discern with a modern raised access pathway running along the west side of the courtyard parallel with one side of the colonnade. At the north end are the remains of the Temple. There you will see a reconstruction of three connected columns and a section of ornately carved entablature defining a short section of the outer west side of the temple – these date to Trajan’s rebuild. If you’re standing inside the Forum then, just behind these 3 columns you can see remaining blocks of the cella in a fairly well-defined rectangle. At both sides of the front of the temple podium excavations have revealed evidence of fountains that date to around the time of Emperor Hadrian. The numerous individual free-standing columns of the double colonnade are a patchwork of pieces that most likely don’t accurately reflect the original design beyond telling you where the original columns from Caesar’s forum were positioned.