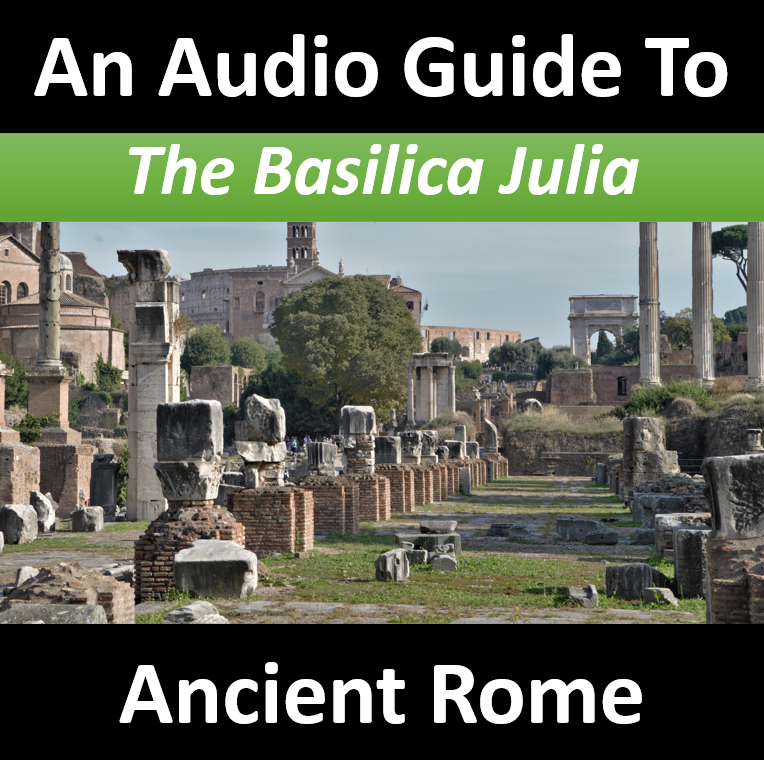 You’re listening to an Audio Guide to Ancient Rome. This episode is one in a series of short descriptions of monuments in the Roman Forum. In this episode I’m describing the Basilica Julia.

The Basilica Julia was dedicated by Julius Caesar in 46 BCE – the same year that his nearby Forum was completed. Caesar funded the construction with monies taken during his highly successful campaigns in Gaul.

But his was not the first Basilica on this site. Over one hundred years earlier Tiberius Sempronius Graccus had bought a house from his father-in-law as well as adjacent butchers shops, tore them down and built in their place the Basilica Sempronia. This original building was smaller, covering roughly two-thirds of the site and positioned at the south east end (towards to the temple of Castor and Pollux).
Competing with his rival Pompey’s major Theater construction in the Fields of Mars, Caesar repaired and extended the Basilica Sempronia at the same time that he was building out the nearby Forum to the north that also bears his name.

In 7 BCE, fire ravaged the buildings around the forum with the Basilica Julia and the Temple of Castor and Pollux being particularly badly damaged. The temple was rebuilt first and rededicated in the year 6, however it took a total of 19 years for the Basilica to be repaired. When completed, emperor Augustus dedicated the building his deceased grandchildren Gaius and Lucius however this new name didn’t find common use.

The Basilica consisted of a central nave and four aisles divided by square pilasters of travertine. These were all once veneered with marble. The fronts and sides of the building were solid marble with Doric half columns projecting out of square pilasters.
The Basilica provided space for civil law courts, shops, government officials and bankers. In the 1st century, it also was used for sessions of the Centumviri (the Court of the Hundred) that, for hundreds of years, convened to make rulings over matters of inheritance.

On the pavement of the Basilica’s portico, people have scratched game board patterns into the white marble. One stone, on the upper tier of the side facing the Curia, is marked with an eight by eight square grid on which games similar to chess or checkers could have been played.

Fire again consumed the Basilica in the year 283 with repairs being undertaken by Emperors Diocletian and Maximian.
A series of inscribed pedestals dated to the year 377 attest to Probianus, a Prefect of Rome, undertaking repairs to the Basilica. At that time he used the building to provide a home for statues and other pieces of art from other Temples and monuments that were falling into ruin. The pedestal plinths engraved with artists’ names have been found in the area of Basilica.

Excavations of the site over the past 700 years have been fairly destructive with early digs focused on removing marble for reuse in other projects. For example, one such effort revealed that the main Roman Sewer, Cloaca Maxima runs underneath the Basilica however, in the process of determining this the giallo antico yellow marble which covered the floor was stripped and sold to a stone-cutter.
A more complete archaeological excavation took place in 1870 under the direction of Pietro Rosa who reconstructed a single marble Doric half column and some travertine supports. These reconstructions are still in place.