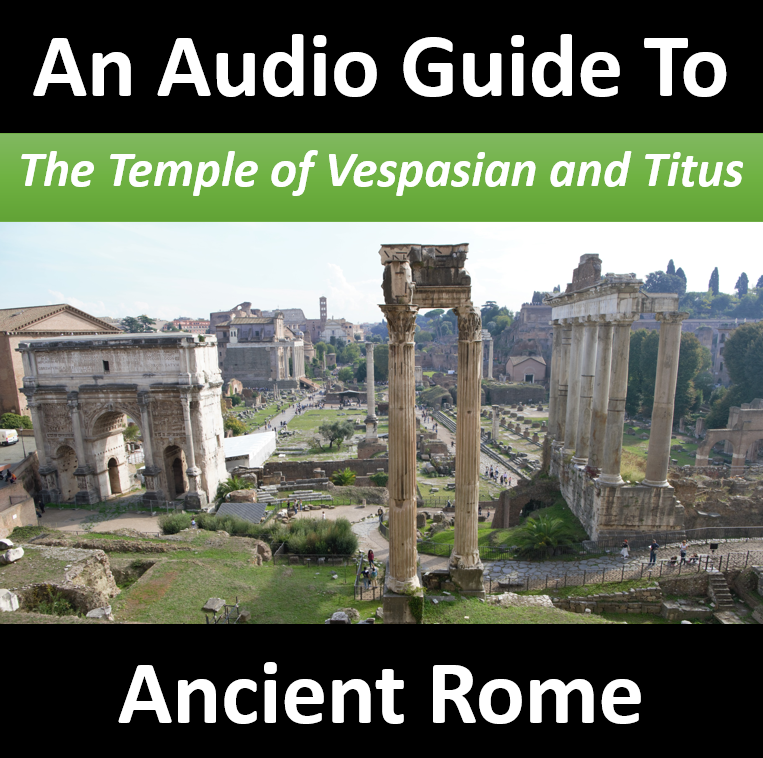 You’re listening to an Audio Guide to Ancient Rome.  This episode is one in a series of short descriptions of monuments in the Roman Forum.  In this episode I’m describing the Temple of Vespasian and Titus.

The Temple of Vespasian and Titus sits at the north-west end of the Forum between the Temple of Saturn and the Temple of Concord and backs onto the Tabularium.  It is readily identified by the three Corinthian columns connected by a carved piece of entablature that together form a right-angle.

These columns establish the front-right corner of the Temple. Originally there would have been a total of 6 columns along the front and 8 running along each side.  There were originally two sets of stairs leading up through the front columns into a portico underneath a large triangular pediment.  This arrangement of steps was unusual and likely a result of the limited space available in this part of the forum.

The pediment seems to have had an inscription across the front with a dedication that read ‘Divo Vespasiano Augusto SPQR’.

The temple was constructed to honor the Flavian Dynasty, which comprised the emperors: Vespasian and his sons Titus and Domitian.

Vespasian was the first of the three to take power in the year 69 – a particularly turbulent time in Rome’s history as it was the Year of Four Emperors. Before coming to power he had already established himself as a shrewd military leader through campaigns in Germania, Britannia and, in partnership with his son Titus, in suppressing the Great Jewish Revolt which included the sacking of Jerusalem. The vast fortune taken during this last campaign provided funds for repairing many public buildings and for the construction of the Forum Vespasiani and the Flavian Amphitheater (what we now call the Colosseum).

Vespasian had ruled for 10 years when he became ill and headed out to convalesce at his summer retreat. However, his illness worsened and he developed severe diarrhea – feeling death approach Emperor Vespasian famously called out “Dear me, I think I’m becoming a god” and then “An emperor ought to die standing” and, while struggling to get on his feet, died in the arms of those in attendance.

Vespasian’s death in the year 79 led to Titus taking power.  Titus proved to be a great ruler who’s short reign was beset by disaster: firstly by the eruption of Mount Vesuvius 4 months after he become emperor and then, 6 months later, by a major fire that ravaged large sectors of Rome and destroyed buildings such as Agrippa’s Pantheon, the Temple of Jupiter and parts of the Theatre of Pompey.

These setbacks seemed merely to provide Titus with even more opportunity to show his virtues as he invested his own time and resources in helping the devastated communities and in rebuilding the lost public infrastructure.  Titus commissioned the building of a Temple to deified Vespasian but his premature death at the age of 41 meant he’d served just 2 years as Emperor and would never see the project completed.

His younger brother Domitian was left to finish the work. Domitian decided to dedicate the new building to both his father and his older brother – so it became the Temple of Vespasian and Titus although, as was noted, the inscription on the front appears only to have recognised Vespasian.

The remains we see today include part of the pedestal in the rear of the cella on which stood colossal statues of Vespasian and Titus.

The partial inscription on the side of the remaining piece of entablature is a reference to restoration of the temple undertaken in the third century commission by Septimius Severus and his son Caracalla.

A reconstructed section of the entablature can be found in the halls of the Tabularium (that’s the Palazzo Senatorio building that overlooks this end of the Forum). This decoration clearly shows ornately carved ox skulls and various instruments used in religious ceremonies and sacrifice.