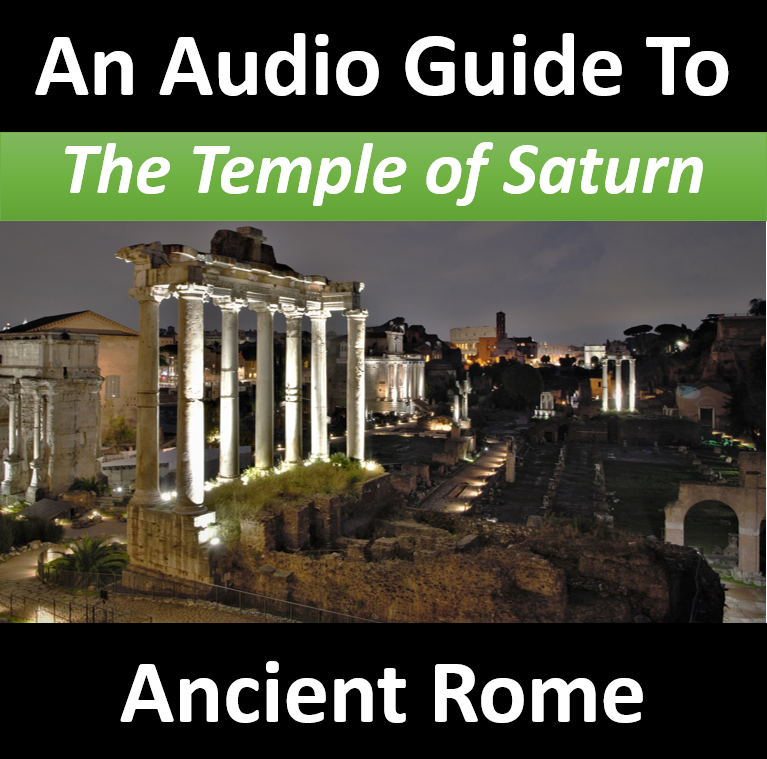 You’re listening to an Audio Guide to Ancient Rome.  This episode is one in a series of short descriptions of monuments in the Roman Forum.  In this episode I’m describing the Temple of Saturn.

The Temple, repaired and rebuilt over many centuries, is one of the most ancient buildings in the Forum.  Its construction was ordered by the last Etruscan King, Tarquin the Proud, in the late 6th or early 5th century BCE and was to be sited in front of an altar already dedicated to Saturn.

It is easily recognized by its 8 remaining Ionic columns – six along the front and one on each side forming the front portico.  These support an entablature with an inscription that can be translated as “The Senate and People of Rome Restored what was consumed by fire”.  This evidences restoration work from the late fourth century.

Over 500 years before this, in the early to mid-first century BCE, Lucius Munatius Plancus used his spoils of war to reconstruct the temple.  Munatius had been one of the generals successfully campaigning in Gaul alongside Julius Caesar and returned to Rome a wealthy man.  However, following Caeser’s assassination he repeatedly switched allegiances to try to remain in favor with however seemed to have the upper hand in the pursuit of overall control of the empire.

The design of the Temple of Saturn however did not significantly change over the centuries despite being repeatedly repaired.  The portico originally had 6 columns at the front and two additional full columns on each side. There was a single main set of steps at the front that lead up to a pair of entrance doors.

Inside would have been a large seated statue of Saturn who’s face was veiled and there would have been woolen binds on the statue’s feet. On his feast day, the 17th of December, these binds were loosened – symbolising that the Romans were ‘cutting loose’ during the Saturnalia. The statue likely also held a scythe as Saturn was the god of agriculture.  Saturn was also associated with wealth and the Temple served as Rome’s Aerarium or Treasury.

The treasury contained the monies and accounts of the state finances, it held the standards of the legions; the public laws engraved on brass, the decrees of the Senate and other papers and important registers.

Viewed from the front, the Aerarium was entered from the left side of the temple in a passage that went underneath the temple’s main steps.

In addition to the common treasury, supported by the general taxes and charged with the ordinary expenditure, there was a special reserve fund, also held in the temple of Saturn. This was the aerarium sanctum. Likely originally created from the money seized from enemies of war, it was later maintained by a 5% tax on the value of all freed slaves. These were emergency funds not to be used except in cases of extreme necessity.

The Senate continued to have at least the nominal management of the funds in the aerarium, while the emperor had a separate exchequer, called the fiscus. However, over time, the power of the emperors increased and the Senates control over these monies diminished.

Lastly, although the front section looks relatively complete closer inspection shows that these are not the original columns.  They are in fact composed of pieces recycled from earlier temples. The shafts of the side columns are made of pink Aswan whereas the six facade columns are a grey granite called Mons Claudianus. Three of these are made from single pieces but the others are made of two sections fitted together.  The Ionic capitals at the top of the columns are the only parts made specifically for this temple.  These are from Thasian marble and carved in typical late style consistent with the timing of the last known repairs.