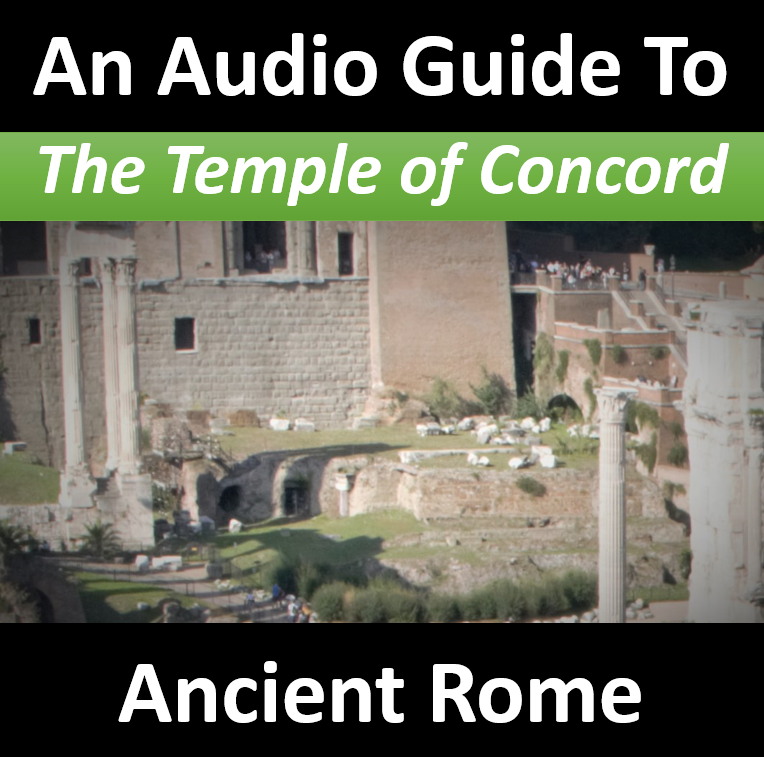 The Temple of Concord is the site of a series of shrines dedicated to the Roman goddess Concordia, and erected at the western end of the Roman Forum. The earliest temple is believed to have been vowed by Marcus Furius Camillus in 367 BCE, but it may not have been built until 218 BCE.

The temple which had been occasionally repaired was completely rebuilt by Emperor Tiberius and dedicated in the year 10 after the original had been burnt down following a lightning strike. Tiberius paid for the construction with the spoils of his and his brother Drusus’ highly successful campaigns conquering and pillaging across vast areas of Germania.

The early version of the temple was similar to the nearby Temple of Castor and Pollux with steps leading up through lines of columns supporting a pediment that led to the entrance doors and a long and narrow main cella. However Tiberius’ version was quite different as the temple expanded sideways with the main cella being wide rather than long – in part this was necessary because of the space limitations at the foot of the Capitoline hill and the fact that is was sited at the foot of the Tabularium. Its sideways expansion meant it ate into the space that had been occupied by the Basilica Opimia (sited to the left of the original building when looking from the path that runs in front of the Arch of Septimius Severus).

What remains of the temple today are largely just the entrance foundations of the cella composed of two large pink-grey Chian marble slabs. In addition, there are pieces of carved entablature on display in the Palazzo Senatorio – this is the large building immediately behind and above the Temple. Inside the museum you can see one of the column capitals with decorative carvings of rams as well as a carved column base.

Pliny the Elder describes the temple as having two statues in addition to the main statue of Concordia shown as the central figure in first century coins. One of the statues was of a pregnant figure of Latona – revered as the goddess of motherhood and modesty by the Romans, she was shown holding two children: the gods Apollo and Diana. The other statue was of and Asclepius (the god of medicine) and his daughter Igea.

Coins from the time of Tiberius show that the main temple steps were also flanked by two statues: one of Mercury (symbolizing prosperity) and one of Hercules (for security). The temple pediment was decorated with more statues: in the middle was a trio of Concord (for agreement and harmony), Pax (symbolizing Peace) and Salus (symbolizing safety and welfare). To the sides of these three deities were spear-carrying statues of Tiberius and his brother Drusus. At the front corners of the pediment were statues of winged victories – taken together these signified the success of Tiberius and Drusus’s campaigns in Germania.

That said, Drusus was not alive at the time of the Temple’s dedication in the year 10. On his way back to the Rhine during his fourth campaign in Germania in 9 BCE, Drusus had fallen from his horse and was badly wounded. His injury became infected. On hearing the news, Emperor Augustus sent Tiberius to be with his brother, travelling from Pavia he rode hundreds of miles across Europe to be at his dying brother’s side. According to Ovid he arrived in time but it wasn’t long before Drusus died. The temple cella often served as an alternate meeting place for the Senate and, more generally, part of the rationale for its design was to serve as a museum for fine art. Pliny tells us that the walls were lined with famous paintings by Theorus, Zeuxis and Nicias. It also housed Greek bronzes and other precious relics.