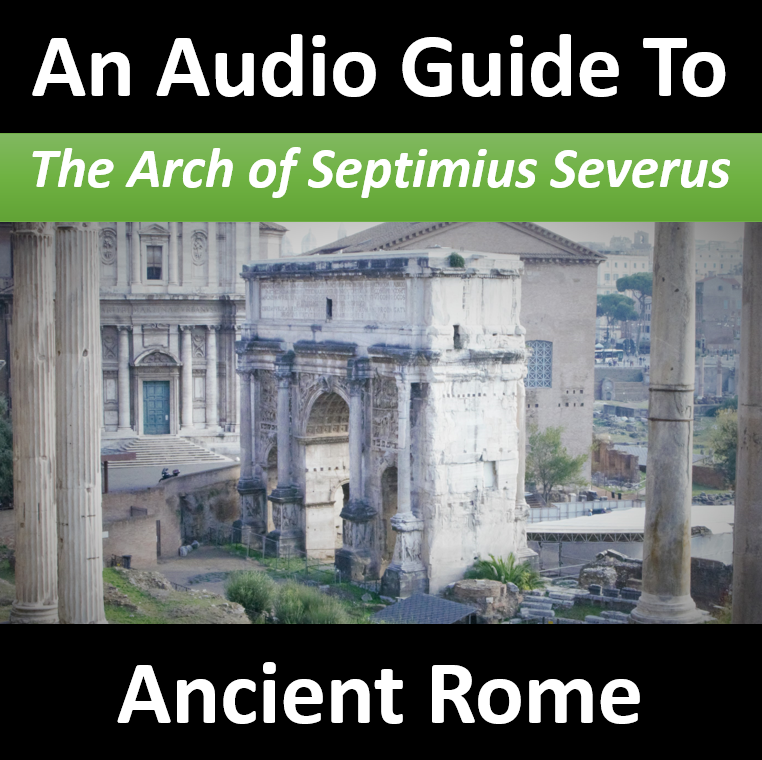 You’re listening to an Audio Guide to Ancient Rome. This episode is one in a series of short descriptions of monuments in the Roman Forum. In this episode I’m describing the Arch of Septimius Severus.

The Arch commemorates the victories of Emperor Septimius Severus and his sons, Caracalla and Geta, in the two campaigns waged against the Parthians between the years 194 and 199.

Before this the Romans had been in conflict with Parthia for hundreds of years with notable campaigns taking place under the command of various of its leaders including Crassus, Trajan and Hadrian spanning from 52BCE through to the early third century. In the first of these, Crassus led an invading army into Mesopotamia, with catastrophic results; at the Battle of Carrhae, Crassus and his son were defeated and killed by the Parthian army under General Surena. The bulk of Crassus’ force was either killed or captured; of 42,000 men, about half died, a quarter made it back to their base in Syria, and the remainder became prisoners of war. Rome was humiliated by this major defeat, which was made even worse by the fact that the Parthians had captured several Legionary Eagle standards. Such history made Severus’ campaigns and the eventual defeat of Parthia particularly important to Rome and worthy of memorialization.
The arch has four carved panels that describe, in chronological sequence, the major events in the course of Severus’ campaigns. Unfortunately some of these are in a poor state of preservation and many scenes are barely discernible. The side that faces the forum is particularly damaged because it has always been exposed to the wind, rain and even a fire in the Middle Ages. If, as we work our way around the monument, you’re having trouble making out the panel details, bear in mind that clearer modern versions of these reliefs can be seen in the Museo Nazionale della Civiltà Romana.

The reading sequence is indicated by four statues of the four seasons, which can be seen at the feet of the Victories in the spandrels (the spandrels are the roughly triangular sections above the central arch). Our starting point is the badly weathered south east panel that is closest to the central Forum area – the panel describes the liberation of Nisibis. Like the carvings on the Column of Trajan, the reliefs should be read from bottom to top.

In this case, each panel is composed of 3 different scenes. The bottom section shows Severus’s army departing the Roman camp. The middle section shows the battle for the city and the top section the Parthian king is escaping on the top right on horseback while Severus (on the left) is addressing his victorious troops.

The right panel on this side of the arch shows the siege and surrender of Edessa. This starts in the bottom third with a battering ram on the left of the panel attacking the city of Edessa on the right, in the middle there is a group of Parthians surrendering to Septimius Severus, the top right of the panel shows a council meeting within a fortified camp and, on the top left of the panel the Roman forces are starting a new campaign.

On the side facing the Capitoline Hill the left panel depicts the attack on the city of Seleucia which is next to the Tigris river, its eventual fall, and the defeated Parthians surrendering to Severus as he enters the city. Similarly, the right panel shows the siege of Ctesiphon, its ultimate defeat and concludes with the triumphant emperor speaking to his victorious army.

As indicated in coins of the period, there would once have been a huge six-horse chariot in gilded bronze on top of the Arch ridden by a statue of Septimius Severus. The chariot-riding emperor was originally flanked by his two sons on horseback, possibly rendered in silver. Trophies and garlands in bronze would also once have adorned the plain surfaces around the inscription on the façades.
You may notice an access door part way up the shorter south-west side. This entry leads to a set of stairs that allowed for the cleaning and maintenance of the monument – for example to polish the bronze lettering of the inscription.

As mentioned, above the central arch on both façades are winged victories that each carry trophies. The arch has the typical central keystone that, in this case, is carved to represent Mars, the Roman god of war. The smaller arches also have keystones that represent Hercules (on the left) and Bacchus (on the right) – both of these were gods closely associated with Septimius Severus. The lower arches carry figures of river divinities. Above each of these side arches is a frieze that depicts a triumphal procession where the spoils of war and prisoners are being paraded. The column plinths each have relief sculptures showing Roman soldiers with captured Parthians.

The lengthy inscriptions on the attic which would have been written in gilded bronze lettering, originally read as a dedication to Septimius Severus and both his sons Caracalla and Geta who, according to the text, ‘restored the Republic and expanded the dominion of the Roman people’.

But that’s not quite what the attribution now says. Whilst visiting the province of Britannia in February of the year 211, Severus grew ill and eventually died in what we now know as the city of York.

Caracalla and Geta had shared an intense rivalry before but this intensified in the months following their father’s death. They had struggled to agree exactly how to divide and govern the Roman empire. In late December 211 Julia, their mother, invited them both to a meeting of peace and reconciliation.

Knowing his rival would be unarmed, Caracalla orchestrated the murder of his brother by a praetorian guard – an execution ruthlessly carried out in front of their mother. He then swiftly implemented a policy of persecuting and murdering Geta’s allies and enforcing damnatio memoriae – or “condemnation of memory” indicating that a person is to be excluded from all official accounts.

The inscriptions on both sides of this arch therefore needed to change, from evidence of the older dowel holes, we know that the wording was edited to remove specific reference to his brother. The wording was meant to reference the ‘most noble Caesar Geta’ but, at the direction of Caracalla, this was changed to the much more generic phrase ‘most noble princes’.

When Canaletto painted the Arch in 1742, only the upper half of the monument showed above ground thanks to repeated flooding of the low-lying Forum that had washed in sediment and debris throughout the middle ages. That said, the otherwise well-preserved condition of the Arch structure is largely due to it being incorporated into the structure of a Christian church in the twelfth century.