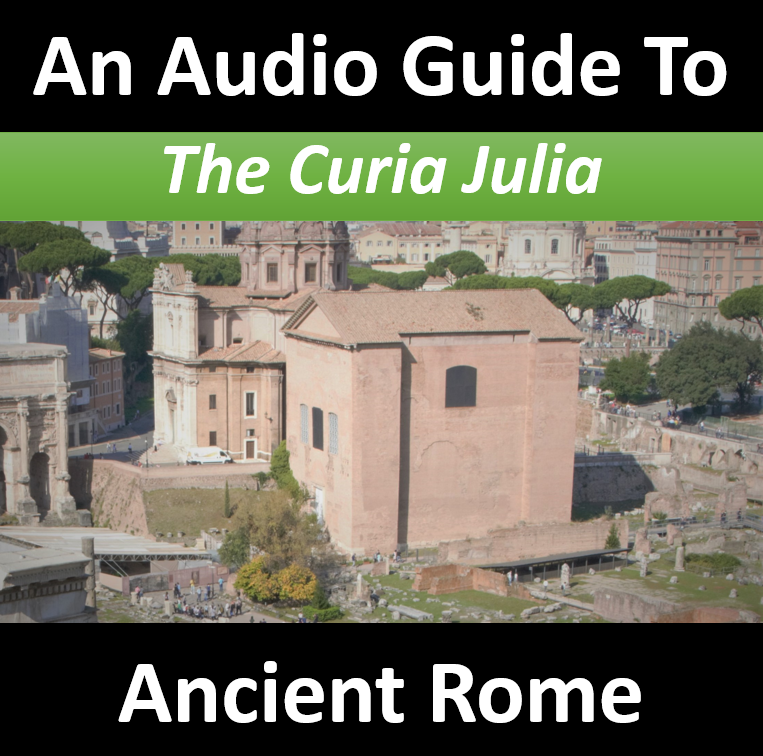 You’re listening to an Audio Guide to Ancient Rome. This episode is one in a series of short descriptions of monuments in the Roman Forum. In this episode I’m describing the Curia Julia.

The Curia Julia is the third building in the Forum that was purpose built as the Senate’s meeting place and each bore the name of its financial sponsor. The custom of meeting in a Curia was believed to have begun in a temple where the warring tribes gathered and laid down their arms during the reign of Romulus. During the early monarchy, the temple was used by senators acting as council to the king. Tullus Hostilius was believed to have replaced the original structure after fire destroyed the converted temple – hence the first purpose built version is known as Curia Hostilia.

This curia was enlarged in 80 BCE by Lucius Cornelius Sulla during his renovations of the comitium at which time it was renamed the Curia Cornelia. That building was lost in 53 BCE when the supporters of the murdered Publius Clodius Pulcher used it as the location of a funeral pyre to cremate his body and accidentally burned the whole place down. Subsequently, Julius Caesar’s major rebuild in 44BCE meant that the Senate sessions were temporarily convened in Pompey’s Theater located next to what is now the Campo dei Fiori. This is why the Theater became the venue of Caesar’s assassination as Caesar made his way there to a meeting of the senate. Caesar’s death delayed the new Curia’s construction which was eventually completed in 29 BCE by Augustus Caesar.

In Res Gestae Divi Augusti, Augustus’s autobriographical account of his deeds he wrote:

I built the Senate House… with the power of the state entirely in my hands by universal consent, I extinguished the flames of civil wars, and then relinquished my control, transferring the Republic back to the authority of the Senate and the Roman people. For this service I was named Augustus by a decree of the Senate.

This version, the Curia Julia, was remodeled by Domitian between the years 81 and 96. Then, in the year 283, it was heavily damaged by a fire. From 284 to 305, the Curia was rebuilt by Diocletian and it is the remnants of this building that we see today although it still carries the name Curia Julia. In 412, the Curia was restored again, this time by the then Urban Prefect, Annius Eucharius Epiphanius.
Each of these versions seem to have followed a similar footprint and design. Coins indicate that, for example, in 28 BCE at the front was a statue of a winged victory standing on a globe at the apex of the pediment together with statues on each of the lower pediment corners.
Also at the front of the building there was a colonnade with a pitched roof that attached to the brickwork where you can see the slot holes in the wall above the door. The bronze doors are modern, the originals were moved in 1660 to the main entrance to St John Lateran. St John Lateran is the highest ranking of the four papal major basilicas, it is the oldest public church in the city of Rome, and the oldest basilica of the Western world.

The Curia could accommodate a Senate session of up to 300 people on chairs placed on the three broad steps that run along both sides of the main hall. At the end of the hall there was another statue and altar dedicated to Victory. The surviving floor from Diocletian’s refurbishment is a truly exquisite decorative pattern using colored marble from across the Empire and beyond. The reddish-purple stone is porphyry from Egypt, the yellow marble is from what we now call Sudan and the green marble (or serpentine) is from Asia Minor (modern day Turkey). Lavish marble decorations continued on the inside walls to roughly two thirds of their height at which point they gave over to stucco or mosaic work and eventually to a richly gilded ceiling.

Like the Pantheon, the Curia was converted into a Christian Basilica and this transition, in the 7th century, helped protect it from the removal of materials that affected most other ancient Roman buildings. That said, the roof, the upper elevations of the side walls and the rear façade date from the remodeling work in the 1930s that took place when the building ceased to be a church.