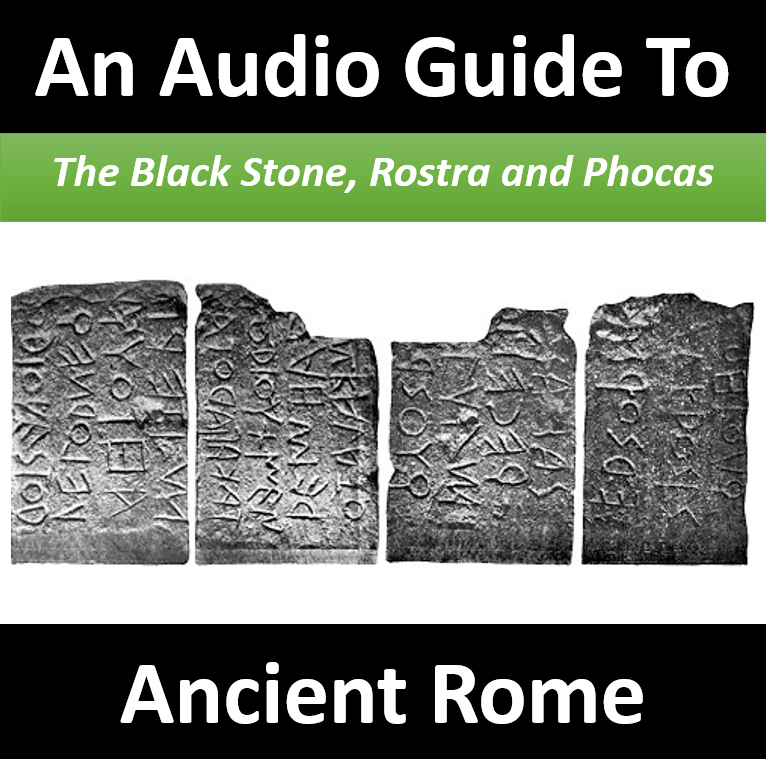 You’re listening to an Audio Guide to Ancient Rome.  This episode is one in a series of short descriptions of monuments in the Roman Forum.  In this episode I’m describing the Black Stone, Rostra and the Column of Phocas.

The Roman Forum sits in a saddle between the Capitoline and Palatine Hills.  Originally a marshy area, successive improvements to the land’s drainage allowed this to eventually become the center of power for the city.

As its armies conquered new territories and money flowed into Rome, the Forum’s original meat and produce sellers were pushed out, to be replaced by majestic temples and monumental structures that accommodated the key societal, political and judicial systems needed for the empire to function.  This area served as a central market and meeting place over many centuries although the nature of the proprietors and clientele changed significantly over time.

The Forum and its surrounding buildings grew to be the focal point for nearly everything associated with the lives of the people of Rome including political discussions, legislative processes, civic entertainment, as well as a logical place to hold a riot or even a cremation.

The area was first surfaced with gravel in 7th Century BCE around the time of the establishment of the Comitium and Senate House (or Curia). Although lost for many centuries and no longer recognizable other than through its archaeological footprint, the Comitium was sited in front of where you now see the meeting house of the Roman Senate (which is often called the Curia Julia). If you’re having trouble locating this, it is to the south east of the Arch of Septimius Severus and hidden underneath a low sloping temporary roof that covers ongoing excavation work.

Also the location of the sanctuary for the fire god Vulcan, this was an important cult center from the very beginning of Rome’s development. The sanctuary consisted of an open-air U-shaped altar, a column which was probably for a cult statue, and an inscribed stela, known as the Lapis Niger (or Black Stone).

The stela is the oldest part of the sanctuary, dating from roughly 570-550 BCE. The altar was erected roughly 200 years later and likely replaced an earlier structure. Only the bases of the altar and of the column survive – together with only the lower half of the stela. The sanctuary was partly demolished and covered with a pavement of black slabs in roughly 80 BCE.

Under the protection of Vulcan, the Council of Elders (or Senate) gathered in the Curia and the citizenry (or People’s Assembly) in the Comitium. These voting bodies had the power to appoint and grant military authority to senior magistrates as well as to create and change laws.

Before the rest of the forum area was significantly developed, the Comitium was the original meeting place for much of the political and judicial activity of Rome. In theory, all adult male citizens of Rome were allowed to vote in the People’s Assembly however clearly there is no way that half of the city’s population could be accommodated in this small area. In practice it has been estimated that just 1% of the population took part in ballots – that would have been 3,000-4,000.

The Black Stone found here bears one of the earliest known Latin inscriptions. Mentioned in many ancient descriptions of the Forum dating back to the Roman Republic and the early days of the Roman Empire, the significance of the Lapis Niger shrine was obscure and mysterious to later Romans, but always described as a place of great reverence. The altar was placed above a sacred site containing much older artifacts that were found roughly 5 ft (1.5 m) below the present ground level.

The Latin inscription on the black stone is written in alternating directions, it is incomplete and therefore not fully understood but appears to describe a religious ceremony to be conducted by the high priest and involving yoked animals – the ceremony appears to be protecting the sanctity of the site and may be giving a warning or perhaps an act of retribution.

For hundreds of years before most of the surrounding buildings were built, Rome was being governed from this site.  Repeated redevelopment of the area has meant that it’s difficult to fully reconstruct the chronology and unravel the full significance of many of the residual structures, artefacts and remains but it is clear that the legislative and political heart of the Roman republic started beating here.

Now turn let’s turn our attention to the rostra at this end of the Forum. Standing close by the covered area of the Lapis Niger, look to the left of the Arch of Septimius Severus. The Augustan Rostra is clearly identifiable here as the long and relatively plain wall made of large blocks and pock-marked with holes. Immediately behind this you will find elements of an earlier version of the Rostra – that of Julius Caesar.

Caesar’s contribution to the current structure is recognizable as a set of white curved marble steps. These once led up to a rectangular platform, which was entirely covered with wooden planks and reached as far as the remaining wall blocks that form the eastern end of the platform.  The holes we see on the outer face of the wall are from the original marble facing as well as the attachment points of the naval rams (or Rostra) taken after the battle of Antium.

These speaker’s platforms towered above the west side of the open Forum area. They were used as the central stage for the political self-representation of the Roman Emperors.  It was here that the Emperors addressed the people of Rome and where foreign rulers would be welcomed into the city. It was also here where the bodies of the dead Emperors were presented to the people and funeral speeches were made.

Lastly, note the single remaining column in the middle of the Forum square.  This is the Column of Phocas. Erected directly in front of the Rostra and dedicated to the Eastern Roman Emperor on August 1, in the year 608, it was the last addition made to the Roman Forum and came very much at the end of the empire.  The fact that this monument is made from multiple recycled pieces from other structures testifies to the fact that the power, money and resources had diminished to such an extent that the Emporer had to make do with a limited supply of good materials.

The main section of the column seems to have been made in the 2nd century for an unknown structure.  The fluted Corinthian column stands 13.6 m (44 ft) tall on its cubical white marble plinth. The plinth was recycled from its original use supporting a statue dedicated to Diocletian; the former inscription had to be chiseled away to provide space for the later text.

So within just a few steps across this part of the Roman Forum you have some of the earliest evidence of the birth of the Roman republic some 700 years BCE through to the last monument erected here that evidences a very much declining empire for a society that had dominated Europe for over 1,000 years.