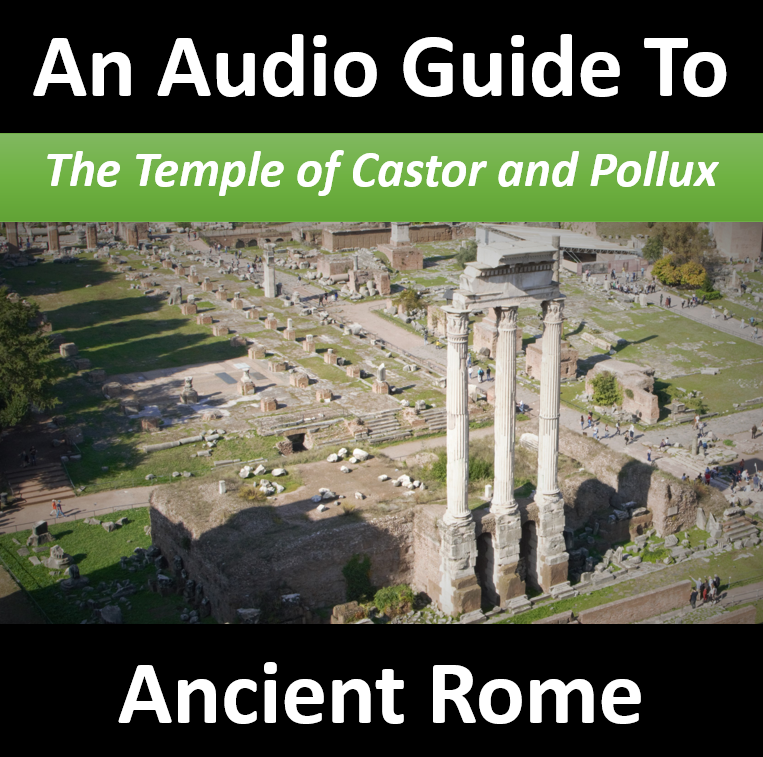 You’re listening to an Audio Guide to Ancient Rome.  This episode is one in a series of short descriptions of monuments in the Roman Forum.  In this episode I’m describing the Temple of Castor and Pollux.

The Temple of Castor and Pollux is readily recognizable by its remaining 3 white columns standing in a line close by the Temple of Vesta.  These columns are part of the side of a much later rebuild of what was originally a 5 Century BCE temple.

The original temple to the semi-divine twins Castor and Pollux was pledged just after 500 BCE by Aulus Postumius Tubertus – an early Roman military leader.

Postumius led Rome’s army to victory at the Battle of Lake Regillus where he defeated the Latin League.  The battle took place after the establishment of the Roman Republic and as part of a broader war with the Latins. The Latins were led by the last king of Rome, Lucius Tarquinius Superbus who had been expelled some 10 years earlier.  Tarquinius fought together with his son-in-law, Octavius Mamilius, the dictator of Tusculum. The battle marked the final attempt of the Tarquins to reclaim their throne.

According to legend, Jupiter’s mortal son Castor and his immortal son Pollux came riding into battle in aid of Rome’s forces – the twins were seen by Postumius and his immediate troops. The semi-gods were carrying spears, riding white horses and helped guide an attack of the Roman troops. They were then seen again, later that same day, at the spring of Joturna where they spread news of Rome’s victory.  The Temple and Spring of Joturna are very close by.

Archaeological evidence shows that the original temple had similar dimensions to what you see today but the design and layout was quite different to the later rebuilt versions.  The first version had steps in the middle at the front that led up to a platform fronted by 4 columns.  There were two further rows of columns making a total of 12 supporting the front portico.  This portico provided the entrance to 3 small chambers.

In the early second century BCE the temple was repaired by possibly Aemilius Paullus in celebration of his victory over the Macedonians. Further modifications and updates were made by Lucius Caecilius Metellus and then by the Emperor Augustus following the devastating fire of 14 or 9 BCE.  He used the repairs to better associate the temple and the divine twins with his own two sons – Gaius and Lucius Caesar. Sadly, both children would die before completion of the project and so, in time, the association changed to be with Tiberius and his late brother Drusus.

In the course of all these repairs and updates the design was changed to be of a form similar to other adjacent forum temples such as that of Divus Julius.  The updated version had two sets of steps flanking the entrance, a row of 8 columns at the front and back and 11 columns on each side.  The 3 remaining columns, which have Corinthian capitals, are from the middle section of the east side.  They support a simple but elegant entablature that would have run around the entirety of the edge of the roof – most likely with a carved dedication on the front that faced North. Ascending the steps at the front one would have passed through the front columns, under a large triangular pediment and into a single main temple hall that likely contained statues of Castor and Pollux.

Given that the temple has a raised podium fronting directly onto the Forum it also served as an orators platform. Perhaps surprisingly, the extremely solid base of the temple’s foundations was divided into chambers for various official public services – particularly those needing the protection of thick walls. For example, some of the chambers served as bank vaults for storing money as this building was regarded as even more secure than the mighty Temple of Mars indeed it was the location of the state treasury. Importantly, here were also kept Rome’s official weights and measured that formed the standards for trading in Roman shops and markets both here in Rome and across the rest of the Roman empire.

In addition to its civic function, the Temple was the center of annual celebrations commemorating the victory at Lake Regillus.  A major cavalry parade was held each year on July 15th and featured as many as 5,000 young men carrying shields and spears. As part of this it was tradition that two young men, riding white horses, would lead the parade and represent the divine twins Castor and Pollux.