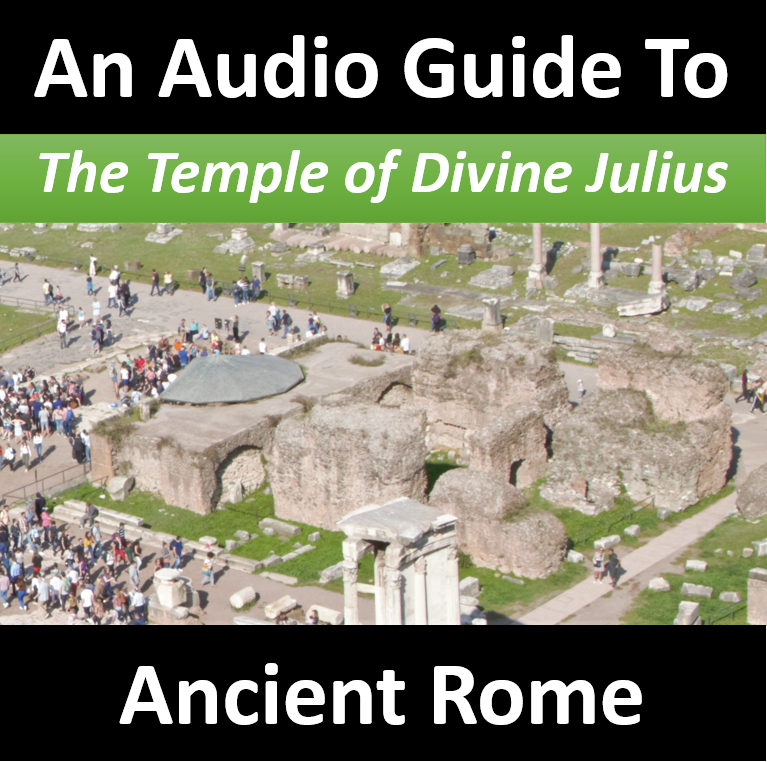 You’re listening to an Audio Guide to Ancient Rome.  This episode is one in a series of short descriptions of monuments in the Roman Forum.  In this episode I’m describing the Temple of Divine Julius.

Little of the Temple of Divine Julius remains however a lot is known about the events that led to its construction and what it looked like.

Julius Caesar was assassinated on the 15th March in the year 44 BCE at a session of the Senate convened in a hall that was part of the Theater of Pompey.  Accounts written many years later suggest he died as a result of 23 stab wounds inflicted by a mob of dagger wielding senators that ambushed him as he entered the hall. The mob included his ally Brutus. Brutus and the rest of the senators had grown quickly unhappy with Caesar’s move to secure power and, specifically, in establishing himself as “dictator in perpetuum” or dictator in perpetuity.

Caesar’s murder would set in motion a chain of events that would eventually see the complete demise of the Roman republic and establish Octavian, Caesar’s sole heir, as the first Roman Emperor, under the name Caesar Augustus. By murdering Caesar the Senate effectively delivered exactly the outcome they had sought to avoid: the creation of an all-powerful and untouchable dictator.

The temple was commissioned two years after Caesar’s death at the direction of Augustus and following Caesar’s posthumous deification; it is sited where Caesar’s body was cremated and where Mark Antony gave a moving speech and read aloud Caesar’s will. His corpse had first transported on an ivory couch to a platform in a shrine modelled on the Temple of Venus Genetrix – this is the goddess claimed as part of the Julian family ancestry.

The location of his cremation was chosen very much in the spur of the moment. Mark Antony’s speech had so affected the crowd that they, together with Caesar’s family and followers, took charge of the funeral service and created an impromptu funeral pyre and burned Caesar’s body here in the Forum next to what had been his accommodation when he served as Pontifex Maximus (or high priest).

Shortly after the funeral the cremation site was marked by a column but, over time, this was replaced with a much more substantial temple that sat on a raised platform.  Set in the front of the temple was a circular sacrificial alter – this was set in a semi-circular alcove – the concrete core of the altar can be seen and is set underneath a modern covering.  The main temple building would have been accessed by steps to the right and left as you face what remains of the alter.

The steps would have led up to a platform that overlooked the forum from where funeral speeches would have been given. Behind this was another set of steps that passed between 6 columns that supported a large triangular pediment.  The pediment was decorated with a symbol of a star or comet – something that had been associated with Caesar’s rising to heaven as, four months after his death, Augustus had arranged for a public celebration of Venus Genetrix.  The goddess was supposedly Caesar’s ancestor and, when a comet was seen in the sky at the time of the games, it was interpreted as Caesar’s ascension to join his divine family.

A denarius coin minted 8 years after Caesar’s death clearly shows his temple, its alter, the pediment decoration, lettering marking the temple’s dedication as well as a statue of Julius Caesar wearing a toga and holding an augur. From this we can assume that, like other Roman temples dedicated to gods, there would have been a single large statue of Caesar standing inside the Temple’s main hall.

13 Years after Caesar’s death, Augustus defeated the allied forces of Mark Anthony and Cleopatra in the Battle of Actium.  As was tradition, he incorporated the prows from Cleopatra’s captured ships into a monument – in this case, the front of the Temple for Divine Julius Caesar.  In Latin the battle ram of a warship is called a ‘rostrum’ the plural of which is ‘rostra’ – by adding them to the front of Caesar’s temple Augustus effectively mirrored the rostra that were captured during the victory at Antium in 338 BCE and mounted on the side of the speaking platform at the other end of the Roman forum.

The temple of Divine Julius was later sandwiched between two triumphal arches.  On the north side (that’s the left while facing the altar) Augustus erected the Actium Arch in 29 BCE further commemorating his victory over Mark Anthony and Cleopatra.  On the south side of the temple Augustus erected the Parthian Arch, celebrating the return of surrendered Roman standards that had been lost to the Parthians some 24 years earlier under Caesar’s reign.