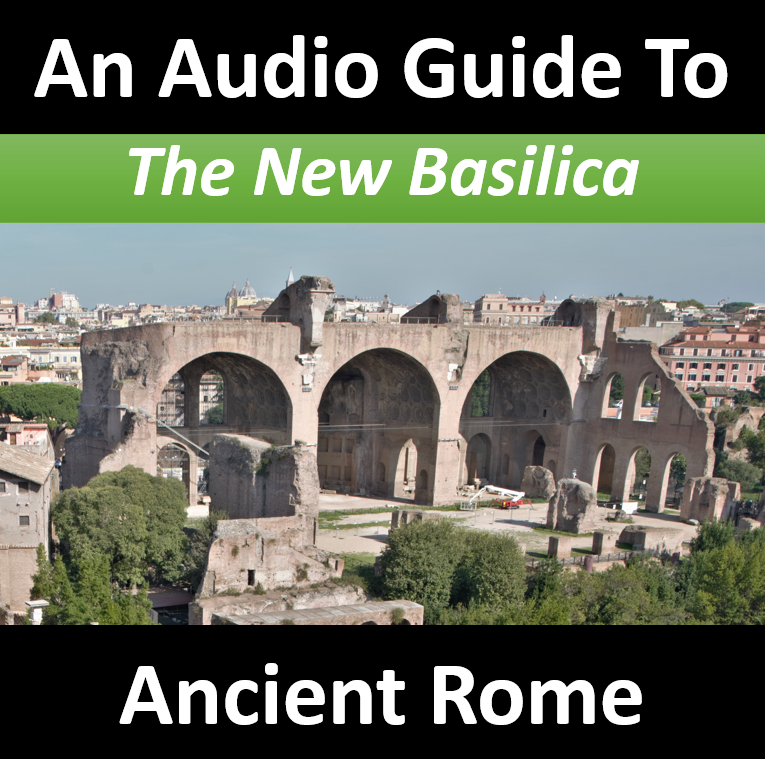 You’re listening to an Audio Guide to Ancient Rome.  This episode is one in a series of short descriptions of monuments in the Roman Forum.  In this episode I’m describing the New Basilica.

Construction of the New Basilica began under the emperor Maxentius in the year 308 but was completed by emperor Constantine in 312 after his victory over Maxentius at the Battle of the Milvian Bridge. Indeed, the change in ruler during its building means that this is sometimes referred the Basilica of Maxentius or the Basilica of Constantine.

The term Basilica in modern usage suggests a large church or cathedral but in ancient Rome it was more associated with a large civic chamber or meeting hall.  It would have contained statues of gods but was not likely a place of worship.

What remains is impressive but represents roughly one third of the original building that, when complete, would have been substantially taller than the structure we see today. The core building material is concrete. This is covered in brick that would then have been, in turn, been covered in stucco on the outside and marble panels inside. The marble would have been held in place with metal pins – evidence of the removal of the marble and valuable pins can be seen in the small holds peppering the surface of the brick.

The 3 large bays that dominate the north side of the Via Sacra faced onto a large central nave and were mirrored by another set of 3 matching bays on the South side. These bays had large windows to help light the halls and the ends each bay’s dividing support wall originally had a massive marble column 14.5 meters high and roughly 1 meter wide. All but one of these 8 columns were destroyed – the last remaining was removed by Pope Paul V in the early 1600s and placed in La Basilica di Santa Maria Maggiore where it still stands. Look high on the walls of the barrel vaults and you will see the remains of some of the marble capitals that capped the columns.

Unlike other Basilica’s in Rome, the columns were decorative and the ceiling was supported using braced arches which had more in common with the construction of Roman baths such as those of Caracalla that were built roughly one hundred years earlier.

On the west (or left side if you are inside the Forum and looking into the 3 bays) there would have been another large alcove that housed a colossal seated statue of the Emperor Constantine. Pieces of the statue can be seen in the courtyard of Palazzo dei Conservatori on the capitoline hill – placed there by the architect Michelangelo around the time that he was redesigning the buildings and square of the Campidoglio.

The remains include the great head, arms and legs of the Colossus which were carved from white marble. The core of the body likely consisted of a brick and wood framework that supported both these marble pieces and flowing bronze clothing in a manner similar to the seated statue of Roma that is now at the center of the facade of the Palazzo Senatorio in the Campidoglio.

Judging by the size of these pieces, the seated, enthroned figure would have been about 12 meters (40 feet) high. The head is about 2½ meters high and each foot is over 2 meters long.

Engraved below the statue was the following dedication:

Through this sign of salvation, which is the true symbol of goodness, I rescued your city and freed it from the tyrant’s yoke, and through my act of liberation I restored the senate and people of Rome to their ancient renown and splendor.

Oddly, amongst the remains were two right hands (both with upraised index fingers) which differ slightly. It has been suggested that the statue was re-fashioned at sometime late in Constantine’s reign and a hand holding a sceptre was replaced by a hand holding a Christian symbol.

There were likely multiple other statues in niches around the inside and outside of the basilica. The floor was tiled in marble with a pattern of circles and squares similar to that of the Pantheon. The ceiling vaults were coffered and would have been decorated with stucco, colorfully painted and gilded.

The basilica’s original primary function is not recorded however it was in use for several centuries. The south aisle and nave probably collapsed in an earthquake around the middle of the 800s. Even though it was in ruins, the basilica had a lasting influence on architecture was studied by many and even had influence on the design of the St. Peter’s Basilica.