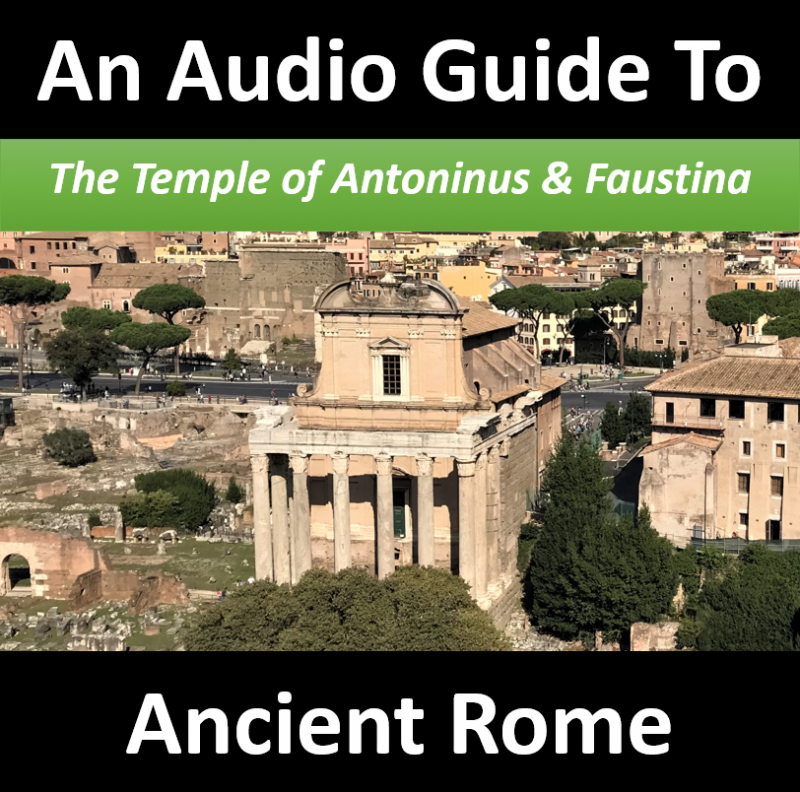 You’re listening to an Audio Guide to Ancient Rome.  This episode is one in a series of short descriptions of monuments in the Roman Forum.  In this episode I’m describing the Temple of Antoninus and Faustina.

The Temple of Antoninus and Faustina is easily recognized by the six columns that dominate its front – these are topped by an entablature that carries the dedication to “Divo Antonino et Divae Faustinae Ex S.C.” which can be translated as “To the divine Antoninus and the divine Faustina, by Senate Decree.”

In fact the temple was constructed by Emperor Antoninus Pius in honor of his wife Faustina, who had died in the year 140.

Antoninus had married Annia Galeria Faustina the Elder roughly thirty years earlier sometime between the 110 and 115. Faustina was a beautiful woman and Antoninus cared for her deeply. They are believed to have enjoyed a happy marriage and together had four children, two sons and two daughters. As empress, Faustina was well respected and renowned both for her beauty and wisdom. Throughout her life, as a private citizen and as empress, Faustina was involved in assisting charities for the poor and sponsoring and aiding the education of Roman children, particularly girls.

Faustina died at the age of 40 and Antoninus was devastated. He asked the Senate to deify her as a goddess and authorized the construction of a temple to be built in the Roman Forum in her name. He had elaborately decorated coins with her portrait minted in her honor that were inscribed with ‘DIVA FAUSTINA’. To continue his wife’s work with the young impoverished and destitute daughters of Rome, he founded a charity called the Girls of Faustina.

The emperor never remarried. Instead, he lived with one of his wife’s freed women. Taking a concubine was a deliberate choice for some powerful men in Ancient Rome as the relationship could not produce any legitimate offspring who could threaten their heirs. Also, as one could not have a wife and an official concubine (or two concubines) at the same time, Antoninus avoided being pressed into a marriage with a noblewoman from another family.

In the end Antoninus outlived his wife by 20 years. Upon his death, his name was added to the inscription by Emperor Marcus Aurelius who rededicated the Temple to both Antoninus and Faustina.

The Temple stands on a high platform of large grey peperino tufa blocks. These support a total of eight Corinthian-style columns in the entrance portico. Each of these is 56 ft tall that in turn support the well-preserved bas-relief of the frieze under the cornice that feature a repeated pattern of acanthus scrolls, candelabras and griffins. Originally there would have been an ornately carved triangular pediment capping the entirety of the portico.

A large seated statue of Faustina would have been inside the temple’s main room or cella. Fragments of this statue and one of Antoninus Pius were discovered in front of the Temple and are displayed in the portico.

Around the seventh century the building was converted to a Christian church, La Chiesa di San Lorenzo in Miranda. As with many temples in Rome, coming under the protection of the Roman Catholic Church likely helped preserve its structure however there has been significant removal of materials. As examples, originally, the podium and steps were faced with white marble and the deep grooves in the temple’s columns are reflect an attempt to dismantle the pillared portico, either to extract metals or simply to destroy what was viewed as a pagan temple. The grooves also may have been used to attach a makeshift roof over the portico.

In the early 1400s, Pope Martin V gave the church to the Collegio degli Speziali or guild of the apothecaries who still make use of some of the surrounding buildings.

In 1536 the church was partially demolished and the side chapels removed in order to restore the ancient temple for the visit of Holy Roman Emperor Charles V. It was further remodeled in 1602 by Orazio Torriani, creating a single nave and three new side chapels.