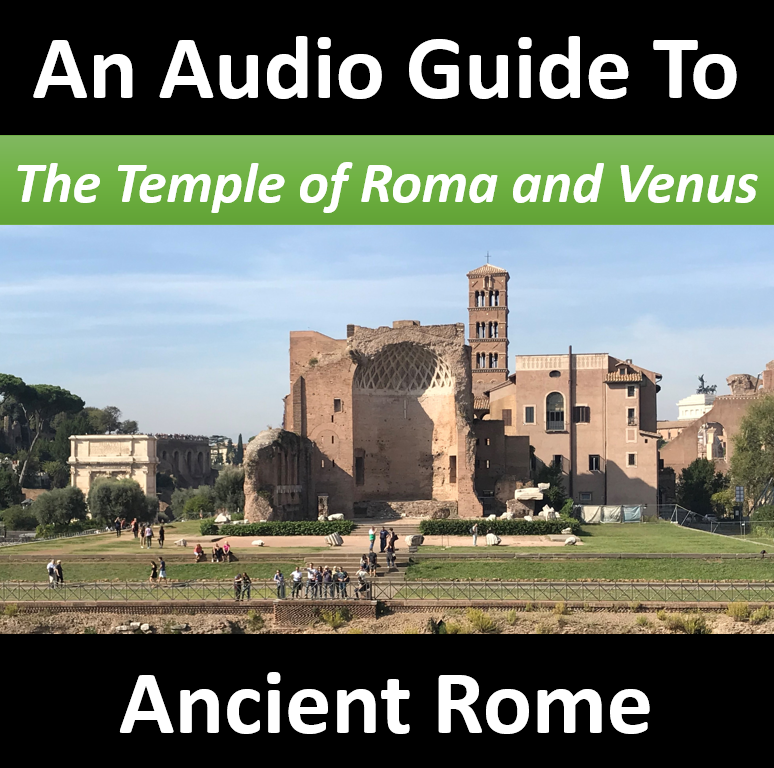 You’re listening to an Audio Guide to Ancient Rome.  This episode is one in a series of short descriptions of monuments in the Roman Forum.  In this episode I’m describing the Temple of Roma and Venus.

The Temple of Roma and Venus was designed and commissioned by the Emperor Hadrian.  Building started in the year 121 and this, the largest of Rome’s Temples, was inaugurated in the year 135. That said, construction may have continued for several more years and was likely completed under Emperor Antoninus Pius in the 140s.

This Greek-style temple, which follows an east – west axis, is set on a huge purpose-built platform 145m long and 100m wide. The platform is made with bricks and concrete and is covered by travertine marble. The eastern edge of the platform, which was built on a slope, stands on arched vaults that created a series of rooms. The overall layout and scale of the Temple is best seen from the upper tier on the west side of the Colosseum.

The main building material used for the construction of the temple was Greek Proconnesian marble. This high quality clean white stone would have emphasized the “simplicity” of the whole building.  Even so, the temple was partially colored with, for example, the Corinthian capitals being painted gold. Yet, the overall impression would have been of a clean white structure with notable features that emphasized its similarity to Hellenistic temples and sanctuaries. Firstly, with the temple sitting on a raised platform it was surrounded on all sides by a flight of seven steps. This, the crepidoma, clearly distinguished this Greek-style temple from the other nearby Roman temples that gave access normally only from a main set of steps at the front. Also, the temple had two concentric rings of columns surrounding the central building – again a feature that echoed Greek-Hellenistic architecture.

This was the first dedication in Rome to Roma as a divinity in her own right; here she was worshipped as Roma Aeterna (‘Eternal Rome’) and she carried a spear and a symbol of victory. Roma is paired with Venus Felix which literally meant ‘lucky’ Venus but was intended to represent fertility and prosperity. Together the two goddesses made a combined symbol of the new era of prosperity that had supposedly begun under Trajan.

The goddesses sat back-to-back on thrones in the middle of the temple facing outwards on the long axis of the main building.

Here Venus was also used to represent love which in Latin was written as Amor – conveniently this is Roma spelled backwards. By placing the two divinities of Venus and Rome back-to-back in a single temple Hadrian enjoyed the further symmetry of their Roman names.

In his history of Rome, authored roughly a century later Cassius Dio writes that Hadrian showed his design for this temple to Trajan’s favorite architect and engineer, Apollodorus of Damascus.  When Apollodorus suggested there were multiple issues with intended construction, Hadrian became enraged and banished the architect into exile. The Emperor later arranged for his conviction under fabricated charges and subsequent execution.

Originally the two sides of the temple were connected and visitors could walk from one statue to the other inside the main temple. However, after fire damage in the year 307, Emperor Maxentius completely divided the space and provided a backdrop for both statues, by introducing symmetrical semi-circular apses topped with coffered half-domed ceilings. The apses form the core of what is visible today.