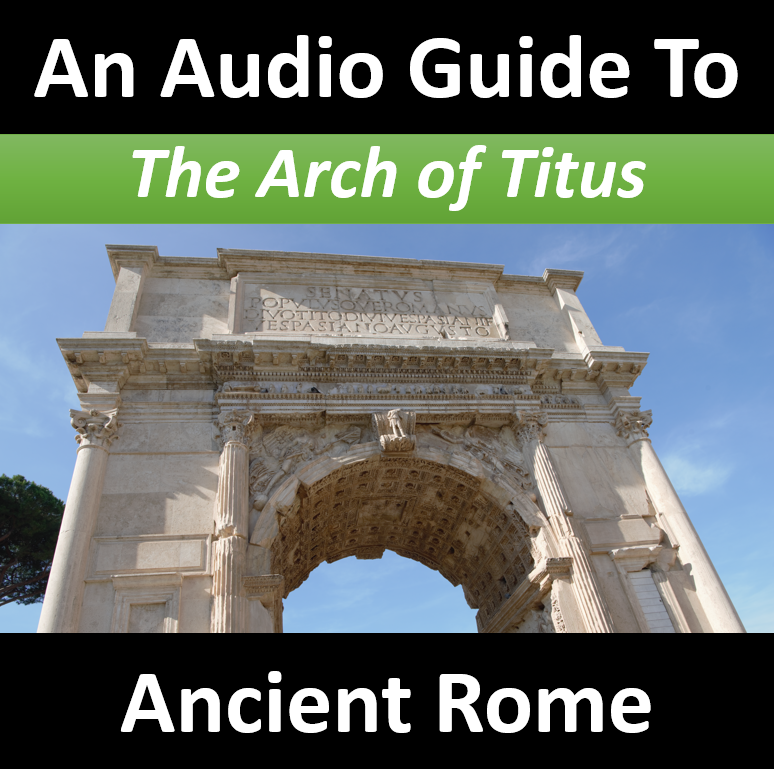 This monument celebrates processional triumph given to Titus following his successful campaign in Judaea. To understand more specifically when and why the arch was built we need to dig into a little of his and his family’s history.

Titus was the son of Emperor Vespasian and his younger brother was Domitian.  Together these three rulers form what is referred to as the Flavian dynasty.  They are responsible for some of Rome’s most notable military victories and, enriched by the spoils of war, were able to invest in constructing new temples, restore decayed public buildings and create new entertainment venues such as the Colosseum. Destiny would have each serve time as emperor, but Titus’s reign would prove to be the shortest, lasting only 2 years and beset by disasters. So, given his short tenure, why is there an arch commemorating his success?

Importantly, Titus commanded the Roman army during the siege and destruction of Jerusalem in the year 70. This was the culmination of a four-year campaign in Judaea which had been triggered by the Jewish uprising in the year 66. The end of the campaign came with the sacking of Jerusalem and the destruction of the Second Temple of which little now remains but a short section of wall – known today as The Western Wall. It has been estimated that over a million people were killed during the siege, of which a majority were Jewish and nearly 100,000 were captured and enslaved.

Despite the human carnage, Titus was awarded a triumph on his return to Rome in the year 71. Accompanied by both Vespasian and Domitian, he rode into the city and was enthusiastically greeted by the Roman populace as they cheered the lavish parade that openly flaunted the treasures and captives from the war. Accounts describe the procession as displaying hoards of gold and silver, followed by elaborate re-enactments of the war, they paraded Jewish prisoners, and showed the treasures taken from the Temple of Jerusalem, including the most sacred possessions of the Menorah and the Torah. To finish-off the celebration, leaders of the Jewish resistance were executed in the Forum, after which the procession closed with religious sacrifices at the Temple of Jupiter.

The Arch memorializes both the victory and, specifically, the triumphal procession when Titus was honored by all of Rome.  It is one of 3 remaining triumphal arches in the city – of the others, one is dedicated to Septimius Severus and the other to Constantine. These are relatively close by and all three are on the triumphal route used to celebrate successful military campaigns.

The inscription that faces the Colosseum is original and makes clear that this monument is dedicated to the Emperor Titus.  It can be translated as:

“From the Senate and People of Rome to the divine Titus Vespasianus Augustus, son of divine Vespasian.”

The language and imagery used on the arch indicate that it was built after Titus’s death as he is referred to as being defied and shown ascending to heaven in one of the central motifs.

Now, looking at the inner walls of the Arch we see carved panels on each side.

The south panel shows the spoils of Jerusalem being brought into Rome – notably the ancient Hebrew 7-branched candlestick or Menorah.  It is likely that the seemingly blank signs being held up in the procession would have displayed the painted names of the cities conquered during the campaign.  On the right side of this panel you can see a part of Rome’s triumphal arch which indicates that this scene was from the start of the parade.

The north panel on the inside of the arch shows Titus sharing his chariot with a winged figure that depicts victory – victory is holding a wreath over the emperor’s head.  His four horses are being led by the goddess Roma. The two figures next to the chariot can be interpreted as the people of Rome – represented by the figure with the naked torso, and the Roman Senate, represented by the figure wearing a full toga.

At the very top of the underside of the arch we see Titus’s head and shoulders above an eagle – the combination of which represents his ascension to heaven.

On the outside, framing the archway on both sides we see roughly triangular carvings of more winged victories. Also, just above these and circling the whole arch is a small frieze that depicts the entire triumphal procession. Set in the center of each side of the archway is a keystone representing Roma and the Genius of the Roman People.

Originally, the top of the arch would have been decorated with a huge bronze four horse carriage or quadriga.

The inscription on the side facing into the Roman Forum recalls the restoration of the arch by Pope Pius VII in 1821, and reads:

(This) monument, remarkable in terms of both religion and art, had weakened from age: Pius the Seventh, Supreme Pontiff, by new works on the model of the ancient exemplar ordered it reinforced and preserved. In the 24th year of his sacred rulership.

The restoration work that this refers to was major as the arch had been built into a wall of medieval fortifications. As a result it had been completely dismantled and then reassembled with some parts replaced with new materials.