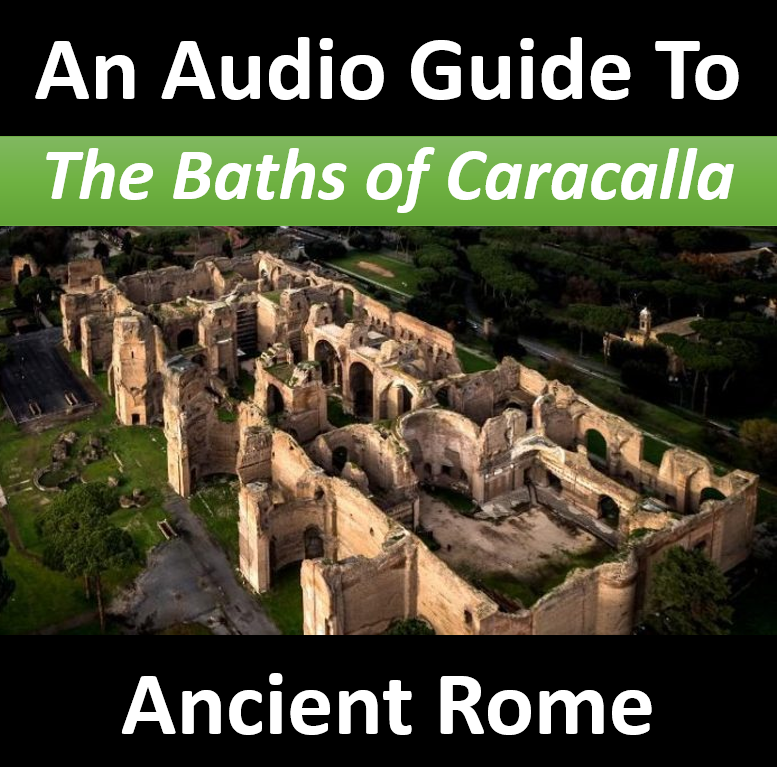 The Baths of Caracalla occupy a truly huge site to the south of the city.  They were the eighth to be built of the eleven documented during the fourth century. The first of these came about when, in the year 12, Agrippa bequeathed his personal baths to the people of Rome, giving them their first experience of the palatial and opulent lifestyle enjoyed by the city’s rulers.  By doing this Agrippa established something of a trend with later emperors building public baths as part of their patronage.

This particular construction was likely originally commissioned by Septimius Severus; but inaugurated in the year 216 during his son Caracalla’s reign. The opening of the baths came at a time when Caracalla had serious need of a positive public relations message.  In the preceding years he’d been feuding with his brother and co-emperor, Geta with whom he’d struggled to agree exactly how to divide and govern the Roman empire. In late December 2011 Julia, their mother, invited them both to a meeting of peace and reconciliation.

Knowing his rival would be relaxed and unarmed, Caracalla orchestrated the murder of his brother by a praetorian guard – and all ruthlessly carried out in front of their mother. He then swiftly implemented a policy of persecuting and murdering Geta’s allies and erasing Geta’s name from many of the monuments in Rome. Tens of thousands of Romans died in his purge.  Clearly still a little sensitive about public perception of what he’d done, a couple of years later Caracalla visited Alexandria and claimed self-defense as a motivation for his brother’s death.  When he found out that the Alexandrians found this a laughable excuse Caracalla lured the civic leaders to a reception and had them murdered, he also ordered large-scale executions across the city.  Tens of thousands of Alexandrians died.

Opening the baths was therefore a grand gesture of benevolence towards Rome and, despite his genocidal tendencies, a demonstration of Caracalla’s warmth and generosity – something that would ideally help heal the wounds felt by many.

In use for roughly 300 years, the baths fell into disrepair around the time of the gothic siege of Rome in 537. Second only in size to the Baths or Diocletian which were built 100 years later, these remains are the best preserved of their kind. The scale of the whole complex is quite remarkable with a footprint significantly larger than the Colosseum – it occupies roughly 100,000m2 (that’s roughly 15 football fields) and could easily accommodate 10,000 visitors at a time.

It contained an Olympic-size swimming pool, hot-rooms heated by both underground furnaces and by large windows that soaked-up the warmth of the sun, it had cool rooms, water storage cisterns, gymnasiums, changing areas, a library, fountains, wonderful mosaics, ornate gardens, exquisite statues, hundreds of columns, a sports running track and other meeting and entertainment rooms.

Our tour starts at the public entrance.  Once inside, make your way along the path that runs parallel with the inner precinct – the precinct wall should be on your left.

As you leave the entrance area, the first thing to note is that this appears to be the perfect site for the baths as it sits on a large expanse of flat ground.  However, before construction started, the whole area needed to be levelled as the Aventine hill ahead of you extended much further out and the current entrance area was substantially lower and actually part of a valley.  After a major landscaping effort, over a 5 year construction it has been estimated that a workforce of roughly 9,000 workers was needed every day to handle the multitude of tasks involved in quarrying, brick manufacture, transportation and building.

Before turning left into the main precinct, look ahead to the hillside. That area contains the access stairway, the Library, running track and, most importantly, the water storage cisterns.  The cistern’s storage tanks, sitting at a higher level than the bathing area, delivered pressurized water through a network of lead pipes into the baths and fountains.  The water came from the Acqua Nova Antoninianus aqueduct. Although the aqueduct’s exact route isn’t known with any certainty there are clues and some fragmentary evidence hinting at how it arrived into the complex.  Its believed that the large swimming pool (notatio) and cold room (frigidarium) were continually supplied with water – in contrast, the water needed to be heated before entering areas such as the caldarium and tepidarium so careful management of the water temperature an flow would have been required to properly control the conditions in different areas of the baths.

Now turn left and make your way inside the closest part of the bathing precinct.

The first open area you come to is a gymnasium.  Here you will find an example of the fish-scale pattern of mosaic flooring.  As you walk inside take note of the size and scale of the surrounding walls. Like the flooring, the walls would have been  ornately finished with tiles, paintings and statues in the niches and alcoves.  Some areas had a second floor as evidenced by the rows of beam-slots high-up in the walls.

You might be wondering why there is a gymnasium here in the baths – it was expected that everyone would, for health reasons, exercise to stay fit and then, after they’d worked-up a sweat, they would go on to bathe.  Exercise might include running, wrestling, boxing or ball games.  So for Roman’s its perfectly normal and expected to be working out before going into one of the bathing areas.

Now you’re going to turn right relative to the way you came in and make your way along the path that leads through the large alcove in the middle of the gym.  Follow this along to the point where you are roughly in the center of the precinct.

You’re now standing in the cold room or frigidarium.  This area is the main junction between the swimming pool (notatio), tepidarium (warm room) and caldarium (hot room) – this room is at the heart of the baths. Coming from the west side gym, the swimming pool will be through the arch on your left and the tepidarium and caldarium are on your right.  The frigidarium contained a number of fountains and cold water pools. Notable artefacts removed from here include the two massive granite baths that provide the bases for the fountains in the Piazza Farnese and the giant Farnese statue of Hercules, which is in the National Archaeological museum in Naples. The room is 54m x 24 meters and covered by 3 cross-vaults that sat on eight colossal grey Egyptian granite columns. The architectural framing, colors, statues and overall grandeur would have been breathtaking and has carried influence in modern architecture; for example, the design of the New York’s Chicago and Pennsylvania Railroad Stations directly copy this layout and design.

From this room, bathers could go through the tepidarium into the caldarium and on into its side-room saunas.  Underneath that area there are furnaces used to heat the water for the seven marble pools each a meter deep and roughly 9m long and 5m wide.

The circular Calderium, accessed by bathers through heat-retaining doors and narrow passageways, had a marble floor and was covered high-up by a 36m-wide dome – this was only slightly smaller than the span of the dome of the Pantheon and was comparable in height. The weight of the structure was supported by 8 pillars between which there were large glass windows.  The use of glass in this south-facing part of the building meant that there would have been significant solar heating for that bathing area.

Continue on along the path until it opens out into another gymnasium – this is the eastern gym and it mirrors the space on the other side of the precinct.  Here you will find more mosaics and examples of some remaining pieces of the marble decorations that would have adorned the walls.  This is also where another of the colossal bath statues was located – known as the Farnese Bull, this is also now in the National Archeological Museum in Naples but, when originally rediscovered, Pope Paul III Farnese had the sculpture placed outside the family Palazzo in Rome.  The sculpture depicts the torture of Dirce which, legend says, was tied to the horns of a wild bull and dragged to her death.

Now turn left and left again to follow the path that leads into the large open air swimming pool. Along the way you will first pass through the apodyterium and then the vestibulum. The apodyterium was the main entry into the baths, this is also the changing room and would likely have had cubicles or shelves where citizens could store clothing and other belongings while bathing. The vestibulum is simply the access way to the swimming pool.

You should now be standing in what was the main swimming pool.  The large wall with numerous empty niches used to be home to massive columns with capitals (that have been robbed out) and what would have been an impressed display of statues.  The wall was divided into 3 parts separated by the two missing columns. Each part would have had 6 statues. In the row of niches at floor level its still possible to see signs of the plumbing and fountains that fed water into the pool.  Bathers entered from the steps accessed via the vestibulum at each side.  If you now walk along the full length of the pool and look down at one of these white steps on the left you should see a pattern carved into the marble. This is evidence of Romans playing poolside games – the step provides the board for a game involving marbles or stones.

Continue on and you make your way back around to the first gymnasium room and then back out into the gardens, as you go, consider the following:

Underneath you is a large system of passageways, access tunnels, pipes and service points used to keep the baths working and heated through the hypocaust system and to feed the various fountains and bathing pools.  The tunnels are big enough for horses and carts to navigate – necessary because of the tons of wood needed to fuel the fires required to heat the water.  These were lit by skylights windows that allow both light and fresh air into the tunnel network. There were feeding and watering troughs for the horses as well as furnaces and a working water mill.

In addition to all these highly functional services, not far from the entrance there is a Mythraeum.  In fact it is the largest known site of a gathering place for followers of Mithras. Worshipped in many underground locations across Rome, Mithraism was eventually viewed as a rival of early Christianity and faced persecution from Christians – the religion was subsequently suppressed and eliminated from the empire by the end of the fourth century. The Mythraeum is located underneath the walled area along on the right when you walked from the entrance and roughly in line with the end of the precinct, note that there hasn’t been open for viewing for several years – you’ll be one of very few to see this area if you’re lucky enough to visit at a time when they are allowing public access.

Our tour ends here however do spend time walking around the site to soak in more of the scale and grandeur of the best remaining example of a roman Bath.

If you’re interested, there are 3 other episode tours for sites close by. These are: