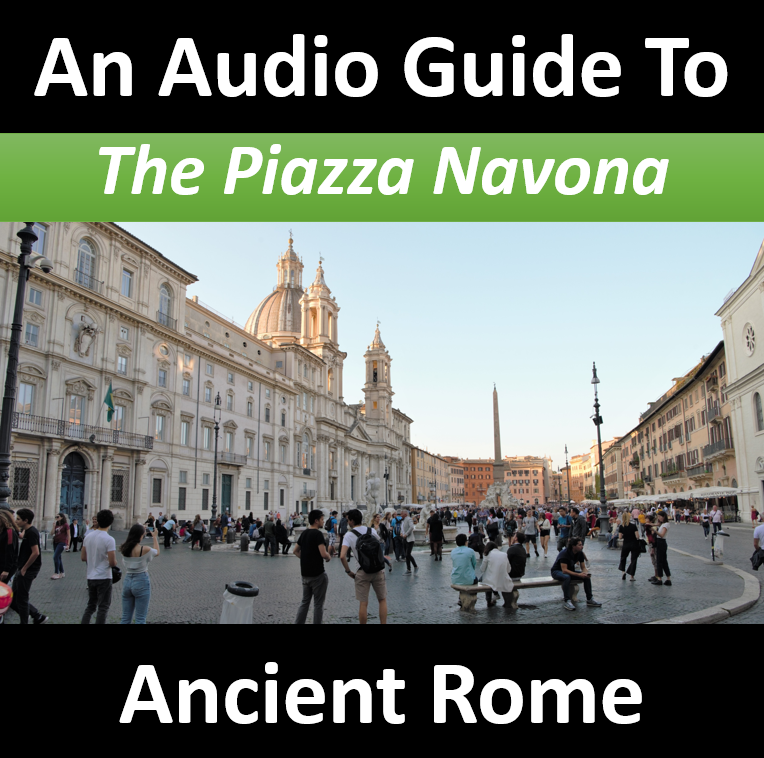 We will start our tour at the south end of the Piazza.

It’s difficult to imagine it now, but the Piazza Navona we see today sits on the footprint of what was a major sporting stadium that accommodated roughly 30,000 spectators.

Known it its day as the Circus Agonalis it was commissioned by Emperor Domitian and opened in the year 86. Building must have started around the time of the inaugural games in the Colosseum which means it was part of the massive expansion program in entertainment venues started by Emperor Vespasian and continued under his sons Titus and Domitian.

Construction of the stadium came at a time when Domitian needed to establish credibility with the people and Senate of Rome – for years he had been overshadowed by both his father and brother who’s victories and public works had propelled the empire to new heights.  Vespasian’s death in 79 had led to Domitian’s elder brother Titus taking power.  Titus proved to be a great ruler who’s short reign was beset by disaster: firstly by the eruption of Mount Vesuvius 4 months after he become emperor and then, 6 months later, by a major fire that ravaged large sectors of Rome and destroyed buildings such as Agrippa’s Pantheon, the Temple of Jupiter and parts of the Theatre of Pompey.

These setbacks seemed merely to provide Titus with even more opportunity to show his virtues as he invested his own time and resources in helping the devastated communities and in rebuilding the lost public infrastructure.  Titus’s premature death at the age of 41 meant he’d served just 2 years as Emperor. His younger and relatively unproven brother Domitian was declared emperor by the Praetorian Guard, the personal bodyguards of the Roman emperors.  Domitian set about securing his position as ruler by deifying Titus and continuing the family tradition of investing in public sports venues such as the construction of this new athletics stadium.

The shape of the piazza faithfully follows the edge of the athletics running track with banked seating along the sides and around the curved north end.  The tiering of the seats would likely have been very similar to those of the Colosseum – we can guess this from their dimensions and the likelihood that the same design principles and workers were involved in constructing both.

The track, which is roughly 190m long and 53m wide was the venue for nude Greek-style running races.  When the Colosseum was taken out of action due to a lightning strike in 217 it provided a substitute venue for gladiator contests.  Like the Colosseum, underneath the seating were a series of arcades and passageways which, in this case, had the reputation of housing prostitutes.

The stadium was also the site of public executions the most famous of which happened during Emperor Diocletian’s rule in the early fourth century that became known as the martyrdom of St. Agnes. Her story is one of an beautiful and pure young Christian girl of 12 or 13 who, despite being from a wealthy family, became the victim Christian persecution when her name was given to authorities by a young man who’s affections she had refused.

Agnes was dragged naked through the streets to the brothels in the stadium.  She was tried, found guilty and sentenced to be burnt at the stake. Legend has it that the wood pile would not catch fire so a Roman officer slit her throat – her blood poured to the stadium floor and was moped up with cloths by fellow Christians. Her death is commemorated in the massive Baroque church of Sant’Agnese in Agone which dominates the west-side of the Piazza – looking northwards this is the large building half way along on the left side.

Other than the general pattern of the surrounding buildings, not much is left of the Stadium, however, as we work our way to what little is visible we will visit the 3 fountains installed in the Piazza in the 15 and 1600s as well as one other relic of Emperor Domitian.

Still out the South end of the piazza, make your way over to the nearest fountain basin.

You’re now standing next to La Fontana del Moro (The Fountain of the Moor) designed by Giacomo della Porta.  The Moor’s were Muslim’s from Northwest Africa and the Iberian Peninsula – here the central figure stands on a giant conch shell and is shown wrestling a dolphin. When first built this fountain featured only the dolphin, the figure of the Moor was designed by Bernini and added at the direction of Pope Innocent X.  The statues that you see today are copies of the originals that were moved to the Villa Borghese in 1974.

Now let’s move on to the Piazza’s central fountain.

You’re now looking at La Fontana dei Quattro Fiumi (or the Fountain of the Four Rivers) – which, at the time, symbolized mankind’s understanding of the geography of the world and the reach of the Christian faith.  Each of the male figures depicts a river – these are the Danube, Nile, Ganges and Rio de la Plata. Also commissioned by Pope Innocent X but in this case fully designed by Bernini – the fountain’s radical fusion of imagery was unveiled in an elaborate ceremony on June 12, 1651.

Under pressure of a tight deadline, the figures representing the Four Rivers were sculpted in parallel by Bernini’s students. However Bernini did carve the lion, sea creature and palm tree.

The most easily identified River is the Nile: here the large figure appears to be trying to remove a piece of wet cloth from around his head.  This is a clever way of indicating that, at the time that the fountain was built, the source (or head) of the Nile had not been identified – immediately beside him are Bernini’s lion and palm tree.

Moving away from the Nile figure, circle around to the right.

Here you will see a figure that is falling backwards and sitting above a pile of coins.  This symbolizes the Rio de la Plata – the money signifies the wealth and riches newly discovered in the Americas.

Continuing around you will come to the Danube. Geographically closest to Rome, this figure is turned towards the obelisk and is touching the Papal coat of arms with his right hand.

Completing our circuit we have the Ganges, representing Asia. This figure is holding an oar which is understood to represent how much traffic and commerce navigates along the river. Bernini’s sea creature is wrapped around the oar.

Lastly let’s look at the center-piece – the Obelisk. It’s unclear exactly where it was originally cited but the seemingly Egyptian monument was actually carved by Roman’s for Domitian. The hieroglyphic inscriptions on the sides dedicate a hymn to his deified father Vespasian, his brother Titus as well as to Domitian himself.  At the top of the obelisk is a dove with an olive twig – never missing a trick to remind everyone who is in charge, this is the emblem of Pope Innocent X’s family.

Looking more generally at its construction, a striking feature of the fountain is the open void in the core of its structure. This unusual design led to Bernini’s critics suggesting that the whole thing would undoubtedly collapse due to the apparent lack of support directly below the obelisk.  In satirical response the master sculptor ran little strings from its top to the adjacent buildings.

Now let’s continue on to the fountain at the North end of the Piazza.

The last in our trio of water features was also design by Giacomo della Porta at the same time that he conceived what is now the Moor Fountain at the other end of the square.

In its time, the was known as the La Fontana dei Calderari due to the fact that there was a little alley of blacksmith’s workshops nearby. For the first 300 years, it had none of the figures you now see. In 1873 a competition was held to add statues to balance those of the Moor and Four Rivers Fountains. In 1878, Antonio della Bitta added the central sculpture of Neptune, the Roman God of the Sea who is shown fighting an octopus, and Gregorio Zappala created the other sculptures of horses, cherubs, dolphins and mermaids.

We’re now going to leave the piazza using the Via Agonale – this pedestrian road is on the Northern end of the Piazza.

Walk to the end of this short street and turn immediately left, as well as a taxi rank, you should see a rectangular opening in the wall on your left.

Here you will find one of the few remaining visible pieces of the Circus Agonalis – Domitian’s athletics stadium and the underlying footprint for the Piazza Navona.

The archway you see is one of the northern entrances evidencing that the more modern buildings you see curving around this end along the Via di Tor Sanguigna are also tracking the outer line of the stadium.

The arch is part of a museum that opened in 2014 dedicated to Domitian’s stadium. If you continue a short way along following this curving road and you will come to the museum entrance.  There you can visit the underground levels of Piazza Navona and learn more about the history of the stadium and ancient Roman sports.

Our visit ends here however you are close to 2 other episode tours: