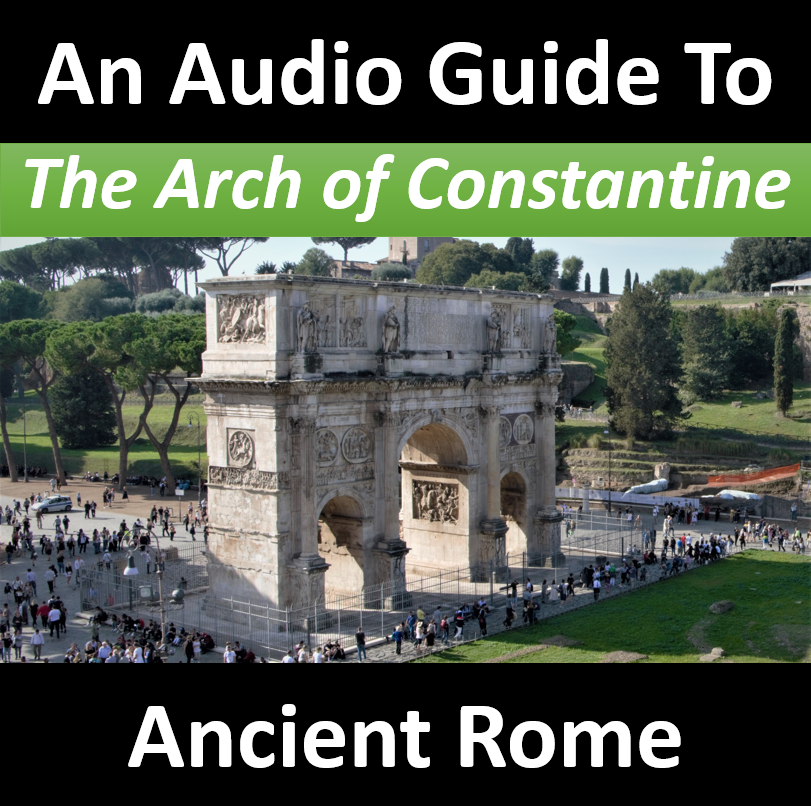 The arch was erected by the Roman Senate to commemorate emperor Constantine’s victory over emperor Maxentius at the Battle of Milvian Bridge which had taken place on October 28 in the year 312.

The inscription shown above the central arch on both sides is somewhat torturous to translate literally but it can be interpreted as follows:

To the Emperor Constantine, the Great, pious and fortunate, the Senate and People of Rome dedicated this arch as a mark of triumph, because by divine inspiration and his own greatness of spirit he avenged the state in rightful battle against the tyrant and all his faction.

The structure straddles the Via Triumphalis, the route taken by the emperors when they entered the city in triumph. It is 21 m high, 26 m wide and 7.4m deep.

Before going into an explanation of the rich details shown on the arch its worth us investing some time exploring the deeper context of why Constantine and Maxentius ended-up waging war on each-other.

To understand why this conflict took place we need to go back a further 30 years to Diocletian’s reign in the third century.  After a period of intense turmoil, Diocletian managed to successfully stabilize the empire and draw an end to a long-running crisis of military anarchy, barbaric invasions and civil wars. In doing this he appointed fellow officer Maximian as Augustus, co-emperor, in the year 286. They divided power with Diocletian overseeing the Eastern Empire, and Maximian reigning the West.

Diocletian then delegated control of the empire even further when, on 1 March 293, he appointed Galerius and Constantius as Caesars, junior co-emperors, under himself and Maximian respectively. Under this ‘tetrarchy’, or “four-way rule”, each emperor controlled roughly a quarter of the empire.  Inherent in this governance model was the potential for intense competition and rivalry, in addition the issue of how succession would be handled had not been addressed.

When Constantius died on 25 July 306, his troops proclaimed his son, Constantine, as Augustus. In Rome, however, the preferred choice was Maxentius, the son of Maximian. Encouraged by this endorsement, Maximian seized the title of emperor on 28 October 306.

Six years later Constantine and Maxentius were engaged in open hostility despite the fact they were brothers-in‑law through marriage. In the spring of 312, Constantine gathered an army of 40,000 soldiers and set out to oust Maxentius.

Constantine marched into northern Italy and was welcomed into several major northern cities because the people had become alienated from Maxentius due to high taxation and failure to keep sufficient grain supply flowing from Africa. Constantine rested his troops and consolidated his power in Milan before pushing further.

Now, to get oriented properly, its useful to note that the arch’s passageways run roughly north-south; the colosseum is to the east and palatine hill on the west.

Specifically, we’re going to focus on the wide rectangular frieze immediately below the roundel. Here the Arch begins its narrative by depicting Constantine leaving Milan, riding his chariot, accompanied by soldiers…. we’re going to follow his story at that height around the Arch.

Walk around to the South and the story continues with the siege of Verona during mid-summer of 312, where Constantine first faced some of Maxentius’ forward army. Verona was easily defended it had protection on 3 sides by a river, so Constantine was forced to lay siege.  The carving shows Constantine twice the size of his soldiers and preceded by the goddess Victory. His army is battling at the city walls. One victim appears to be falling from the wall, while another attacking figure is shown at the foot of the battlements. Constantine’s army eventually took Verona with the result that many other northern cities surrendered.

With momentum building behind his cause, Constantine took his troops south towards Rome and towards his confrontation with Maxentius.

It was expected that Maxentius would remain within the city and endure a siege; he had successfully employed this strategy twice before, during the invasions by Severus and Galerius. Indeed, Maxentius had already organized stockpiling of large amounts of food in the city in preparation. In a surprise move he switched tactics and decided to meet Constantine in open battle.

Maxentius made his stand in front of Ponte Milvio, a stone bridge that carries the Via Flaminia across the Tiber. Holding it was crucial if Maxentius was to keep his rival out of the city as the fickle Senate would favor whoever could be seen as city protector. As Maxentius had probably partially destroyed the stone bridge during his preparations for a siege, he had a wooden or pontoon bridge constructed to transport his army across onto the north bank of the river.

The next day, the two armies clashed. Maxentius appears to have deployed his forces too close to the river, giving them little space for maneuvering in the event that his formations were forced to give ground. Already known as a skilful general, Constantine first launched his cavalry at the cavalry of Maxentius and broke them. Constantine’s infantry then advanced; most of Maxentius’s troops fought well but were pushed backwards toward the Tiber. Maxentius ordered a retreat, intending to make another stand inside Rome itself. However, there was only one escape route, via the bridge. Constantine’s men inflicted heavy losses on the retreating army. In a hurry to regroup, Maxentius’s troops crowded onto the temporary bridge which then collapsed, those stranded on the north bank of the Tiber were either taken prisoner or killed.

Maxentius was among the dead, having drowned in the river while trying to swim across it in an attempt to escape or, alternatively, he is described as having been thrown by his horse into the river. His body was fished out of the Tiber and decapitated. His head was paraded through the streets for all to see.

The Senate dedicated the arch in 315, during the celebration of his 10th year as emperor. The Battle set Constantine on a path which would end the Tetrarchy and result in him becoming sole ruler of the Roman Empire in 325 AD.

The battle also marked the beginning of Constantine’s conversion to Christianity, as Constantine had had a vision of the Christian God promising him victory if he put the Christian symbol of the Chi-Rho on his army’s shields – these look to us like a superimposed letter X and P.

Facing an army much larger than his own, Constantine was happy to try anything to achieve victory, and had his soldiers carry the Christian symbol into battle. Constantine adopted Christianity for himself and declared the religion officially tolerated throughout the Roman Empire via the Edict of Milan in 313 AD, ending Christian persecution.

The event celebrated by the Arch of Constantine was therefore a major turning point in the history of the western world.

Still looking at the South Side, the roughly triangular carvings to the sides of the central arch represent Victory.  Similarly, the bases of the four columns represent both victories and captives.

The triangular carvings above the side archways represent river gods.

The four roundels on this side are repurposed Hadrianic carvings that, from left to right, show:

A hunting party departing the city.

A sacrifice to Silvanus, the Roman god of the woods and wild.

A sacrifice to the goddess Diana.

Now move to the East Side of the Arch.

Here for now we will note simply the continuation of Constantine’s storyline through the depiction of his triumphal entry into Rome – he is shown on the left of this panel riding a four-horse quadriga.

Now move to the North Side of the Arch.

Here the carvings of Constantine’s story show (above the left arch) him giving an oration on the Rostra in front of the Senate. Although unrecognizable, Constantine is in the center. The Roman forum Rostra is shown clearly, with the five honorary columns of Diocletian’s Decennalia behind it. The arches in the background on the left represent the Basilica Julia and the Arch of Septimius Severus is shown in the background on the right. The two statues at the ends of the Rostra are of Marcus Aurelius, on the left as we face the frieze, seated and wearing a toga, and Hadrian, on the right, with his beard, holding a globe in his right hand. Their presence in this scene closely tie Constantine to two great emperors of the past helping to reinforce his rightful position as Emperor.

The equivalent carving above the right arch shows Constantine distributing money to the people of Rome.  This last carving finishes the storyline for Constantine and, together with the east and west-side roundels, this completes the list of carvings on the arch that tie uniquely to him.  Everything else you see is reused material from earlier monuments.

The four roundels here on the North side are also Hadrianic and most likely of the same origin as those on the South side.  From left to right they show:

A sacrifice to Apollo in which Hadrian’s head has been modified to appear as Constantine.

A sacrifice to Hercules which also includes a Victory fogure at Hercules’ left side.

These latter two are still set in the red/purple marble called porphyry – this much-prized decorative material has been robbed away from the rest of the monument.

Now move-in closer to look at the inside of the central arch.

The large middle-archway inner panels as well as the upper east and west side panels are all taken from the Great Trajanic Frieze. Starting with the inner arches, look for the caption Liberator Urbis (Liberator of the City) – the panel below that inscription shows Constantine charging on horseback into battle against barbarians – the head has been re-carved and would originally have meant to represent Domitian or Trajan.

The opposite panel, under the inscription Fundator Quietis (Founder of Calm) shows a barefoot Emperor being crowned by Victory who is accompanied by Honor (the Amazon) and Virtue (in battledress and lion-skin boots).

Moving back to the outer walls, the upper east and west-facing side panels have more pieces of the Great Trajanic Frieze.

The upper western side panel appears to show an ambush by Roman soldiers against their enemies. The Roman soldiers have superior weaponry and equipment, and trample fallen victims while attacking several more. The panel on the upper the eastern end again shows the Romans victorious in battle against more trampled or fallen enemies.

These four panels were part of a single carving that was probably on display in Trajan’s forum – a contiguous reconstruction of them can be found in The Museum of Roman Civilization.

Also, the upper sections (or attics) of North and South sides have 4 panels (two on each side of the inscription) that were originally from an arch (or arches) dedicated to Marcus Aurelius.  The four on the South side show an emperor at war which contrast with those on the North side that show him conducting civilian duties.  In each panel Marcus has been re-carved to represent Constantine.  The Palazzo dei Conservatori museum houses 3 more panels of identical dimensions to these where the original carving of Marcus is preserved.

Lastly, both the north and south-side attics have statues of 4 Dacian soldiers on top of the four columns, carved from pavonazzetto marble.  These were likely  taken from Trajan’s Forum or some monument of Trajan’s time that had been previously dismantled.

Our visit to the Arch of Constantine ends here but there are four adjacent episode tours: