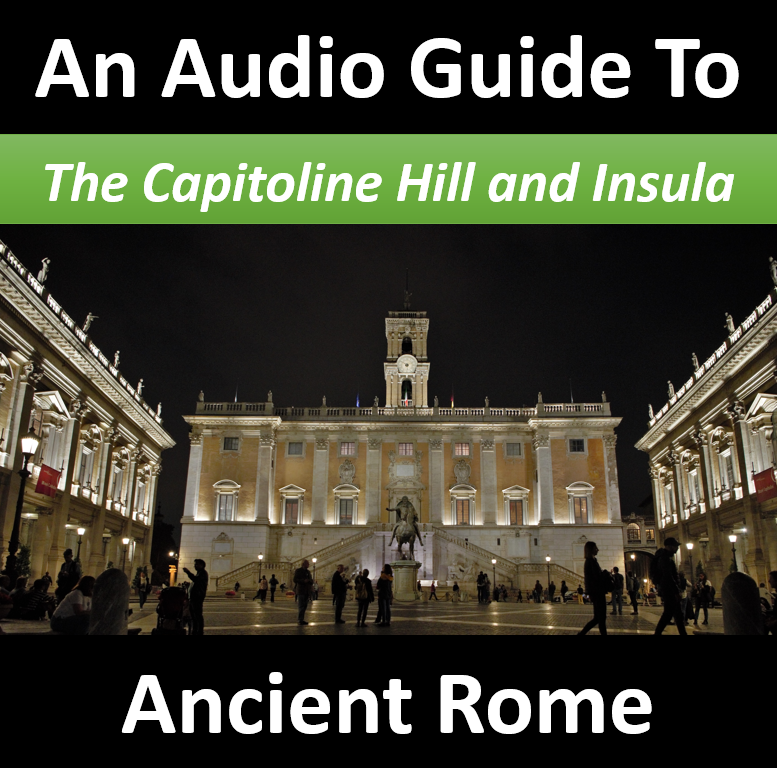 Given the splendor of the Vittorio Emanuele monument towering above you and your likely eagerness to go up to the museums lining the sides of the Piazza del Campidoglio, it would be easy to miss a somewhat modest remnant of common-day ancient city living.

Let’s take just a couple of minutes to check-out something that would have been very common in Roman times but today is quite unique.

If you’re facing the front of the Vittorio Emanuele monument look to the right, beneath the trees and next to the stairs by that lead to S. Maria in Aracoeli: there you will find a 5 (or potentially 6) -story Roman apartment building or Insula.

It has been calculated that this building (which extends under the stairway) would have accommodated about 380 people and is considered a great example of how regular citizens, the plebeians, lived adjacent to the monumental area of Imperial Rome, on the slopes of the most important and most sacred hill in the city.

The insula dates from the second century and was built around the same time as Trajan’s markets that are just around the corner.  At the time that this shop and apartment complex was built it is estimated that the population of Rome was 800,000-900,000 – so there would have likely been thousands of similar buildings across the city.

The original street level, which is 9 meters below the current ground level, consisted of a series of shops with their owners accessing the living quarters above. On the second floor is a mezzanine with a staircase that led to larger balconied living quarters on the third floor. The fourth floor contained 3-room suites and the fifth and possibly sixth floors had smaller rooms serving poorer apartment occupants.  The insula is made of concrete but has a brick facing and likely had a stucco surface on top of that.

If you’re wondering why this building looks a little confusing, in the Middle Ages the highest part of the insula was converted into the Church of San Biagio de Mercato – so-called because there was a market on the slope at the foot of the Capitoline Hill up until the fifteenth century.

In 1653, the church Santa Rita da Cascia was built on top of the market church at the direction of Pope Chigi.

Perhaps counter-intuitively, having these churches built on top of its remains effectively preserved the insula – it is somewhat unique and there are no similar examples to be found anywhere else in Rome.  It was rediscovered during removal of the churches in the 1930’s as Benito Mussolini pursued his desire to have the monumental buildings in Rome stand out in ‘Isolation’ from the rest of the city.

Evidence of the churches can still be seen in the form of the little bell tower and a small frescoed apse that represents the burial of the Christ, with the Madonna and Saint John.

Unfortunately, there is no public access to the Insula however the University of Southampton conducted a comprehensive laser scan of the site.  This allowed the researchers to create an exquisite virtual fly-through – that’s available on their website the details are in the notes for this podcast.

Our visit to the Insula ends here but do check out the other sites and tours available in this podcast series such as the Roman Forum, Colosseum, Ludus Magnus and Arch of Constantine.