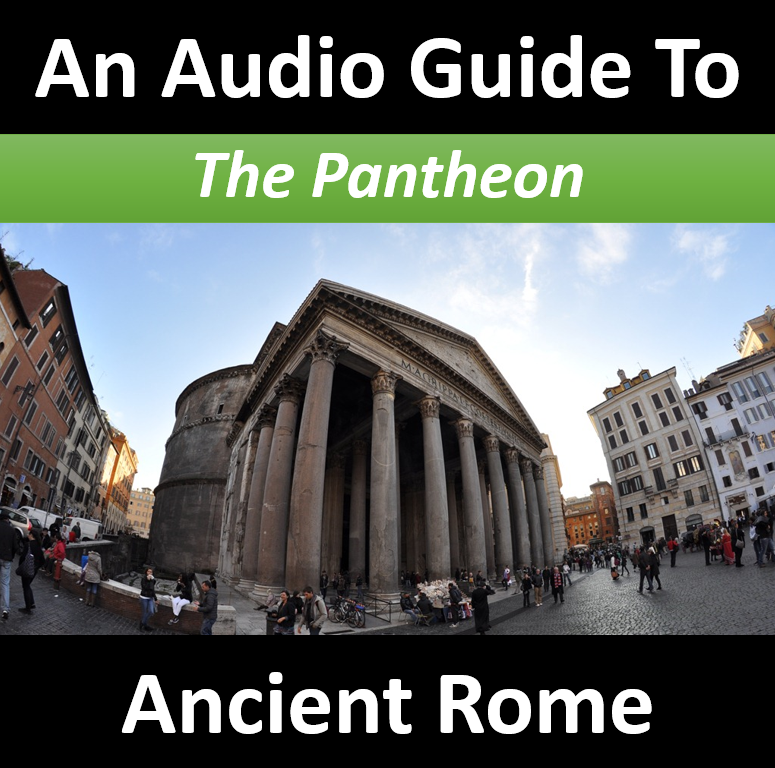 This description and tour starts in the Pizza della Rotonda (that’s the open square just north of the Pantheon).

Before going inside its useful to understand something of the Pantheon’s history and design, this is best done by standing in the square, some distance away from the front portico and to one side of the fountain.

The Pantheon is the best-preserved Roman building in the world.

It was originally built between 27 and 25 BCE by Augustus’ right-hand man Marcus Vispanius Agrippa supposedly as a temple dedicated to all the gods of Rome.

That said, the inclusion of status of Julius Caesar and Augustus as well as those of Venus and Mars means it also served propaganda purposes by blending the images of roman deities with those of Rome’s recent rulers.

The location of the building was important too as tradition maintained that this was where the apotheosis, or raising up to the heavens, of Romulus, Rome’s mythic founder had happened. Also, although you can’t tell it now, the Pantheon was aligned with the Mausoleum of Augustus that had been completed just a few years before.

Agrippa’s building therefore hinted strongly of a connection to Rome’s ancient past and an alliance between the gods and the leaders of Rome during a time when new religious ideas about ruler cults were taking shape.

The large inscription above the porch on the pediment (that’s the triangular front capping the columns) can be translated as “Marcus Agrippa, son of Lucius, thrice Consul, built this”.

For a long time, it was somewhat understandably believed that the Pantheon we see today was indeed the original structure. However, we now know that Agrippa’s Pantheon caught fire in 80 AD.  That structure was rebuilt by Domitian, but his version burned down in 110 AD after being hit by lightning. The task of reconstruction then fell to Trajan’s builder, Apollodorus of Damascus, who, as well as building it, likely also designed what you now see. This last version was built during the reign of Hadrian in about 126 AD.

Barely legible beneath the misleading dedication to Agrippa is a much smaller two-line inscription that refers to renovations by Septimius Severus and Caracalla in 202 AD: in translation it reads ‘With every refinement they restored the Pantheon, worn by age’.

Now look more generally at the structure of the building.

The Pantheon’s basic design is simple yet powerful. It has a front portico with free-standing columns attached to a domed rotunda. The portico has a Greek style, it has sixteen massive Egyptian-sourced granite Corinthian columns capped by an elegantly designed triangular stone pediment. To help transition between the rectangular portico to the round rotunda, there is an element uninspiringly described as the ‘intermediate block’.

Although at first glance this seems all pretty well thought through, it turns out that the intermediate block hints at some perhaps unplanned adjustments in design partway through construction. The evidence for this is visible on the block’s outside face high above the portico’s large pediment…this is best seen if stand to one side of the square and far enough back from the portico to be able to see what is immediately above it – there you will find a triangular pediment decoration very high up on the face of the intermediate block. This looks awkwardly out of place and seems to evidence that the whole portico was supposed to be taller with the pediment standing on column shafts measuring 50 Roman feet instead of the actual 40 RF. Perhaps the taller columns, ordered and shipped from Egypt, never made it to the building site, so they had to switch to what they had available.

Moreover, even though this IS the best surviving Roman building in the world, the view that you now have of the Pantheon is not as it would have appeared in Roman times.

The external brown brick of the Rotunda would have originally been completely hidden behind white stucco.

The dome of the Rotunda was originally covered in sheet bronze but this was removed in July 663 at the instructions of Constans II during his 12-day visit. He sent this valuable metal off to his capitol city, Constantinople.

The Pantheon’s portico served as the bottom section of a massive U-shaped colonnade whose limbs ran out on either side of the open square you are standing in – indeed, that colonnade probably extended out well beyond the other side of the square and would have allowed an open view looking North towards the Mausoleum of Augustus with which the Pantheon is aligned. This is a completely different context for the building than what you see today.

Look back at the portico.

The front portico base originally extended out a further 24 RF (that’s about 7 meters). At that time, access to the Pantheon was via steps to the left and right of this extended base.  The remains of the base and its steps are now lost below the modern surface of the square.  If you are wondering how this can happen – walk over and look at the steps on the more recent fountain in the middle of the square.

Other changes include three columns lost from the left side of the porch during the destruction of medieval buildings that abutted the east side of the Pantheon. Another two missing columns on the left side were replaced by Pope Alexander VII in the mid 1600s with columns found near San Luigi dei Francesi but that were originally from baths built by Alexander Severus. It is easy to pick out these mismatched Corinthian capitals on the left side – don’t worry if you can’t identify them now, you will be closest to them as you exit the Rotunda.

Lastly on our list of changes, above the inscription to Agrippa would have been an ornate gilded-bronze decoration. The pattern of holes hint at a dedication to Imperial Jupiter: an eagle inside a circular wreath with the bird’s wings stretched wide.

Now you have a sense of what the Pantheon looked like outside, make your way into the portico and the entrance to the rotunda.

Note that the Pantheon is now a church so you will likely be asked to remove any non-religious headwear and to keep respectfully quiet whilst inside.

As you pass through the portico take a second to look upwards.  Originally there would have been a series of massive bronze girders supporting the roof.  These managed to remain in place until 1626 when Pope Urban VII Barberini decided it was way more important to convert the roughly 200 tons of metal into 80 cannons for Castel Sant’Angelo.

It is thought that there were also ceiling tiles here and, like the entrance walls, these were probably made of white marble. The best remaining examples of these are on the right-hand side as you enter; these are carved with religious sacrificial tools above garlands looping between candelabras.

You will then pass through a set of bronze doors that, although impressively large, are not original.  Indeed, they’re noticeably just a little too small for the marble door frame.

Give yourself a minute as your eyes adjust to the darker interior; the oculus and the open entry doors are the primary sources of light for the building.

Once inside you can appreciate that the real masterpiece of the Pantheon is the roof.

If you’re standing at roughly the central point then 150 RF above you is an open view of the sky and a concrete dome weighing 5,000 tons.

The interior of the dome is coffered: it has 5 rings of 28 coffers that shrink in size and thickness as they near the central oculus. The ingredients of the concrete mix used to make the coffers was adjusted as the rings narrowed: with lower density and therefore increasingly lighter materials (such as pumice) being used as the rings narrowed and grew higher. The visual effect is of a very striking symmetrical pattern but, more importantly, the architectural and engineering approach is one that vastly reduces weight.

It is not by chance that there are 28 coffers in each ring as this has special significance to the Romans because 28 is a ‘perfect’ number – the sum of its factors (which are 1, 2, 4, 7 and 14) add up to 28.  At the time of the Romans it was one of only four known perfect numbers.

In antiquity, the coffers may have been decorated with bronze stars or rosettes as there is a patchwork of holes underneath the modern concrete rendering.

At the time of its construction, this was easily the largest dome built by mankind.

Both the diameter of the dome and the height of the oculus are 150 RF, meaning a 150 RF ball would fit inside simultaneous just touching the floor, walls, and ceiling. The oculus is 30 RF in diameter, and it has retained a band of sheet bronze around its inner edge.

Imagine the shock of an ancient first-time visitor to the Pantheon. From the looks of the front of the temple, the expectation is that the inside will be a rectangular room with a flat roof and perhaps a statue of a deity in the center. Instead, one enters to discover an enormous spherical room with a seemingly impossible unsupported domed ceiling and niches in the outer wall for the statues of all the deities.

The oculus in the ceiling let in the strong Roman sun, making the building into a huge sundial or letting an afternoon thunderstorm bring rain into the building that would eventually flow out through drains in the floor.

The building is the embodiment of innovation and a masterpiece of engineering.

The Pantheon was restored by Antoninus Pius and subsequently, as noted by the external inscription, by Septimius Severus and his son Caracalla in 202 AD.

Towards the end of the roman empire, the eastern emperor Phocas donated the Pantheon to Pope Boniface IV in 608 AD, and it became a Christian church on May 13 of the following year.

On that day, the emperor donated the gold icon of the Madonna and Child which is still displayed above the apse.  The Pantheon has remained a church since then.

Conversion into a church likely saved the Pantheon from the neglect and scavenging that befell most of ancient Rome’s buildings during the early medieval period, however clearly some appropriation of Pantheon materials did occur and there were some crude modifications. For example, Capitals from some of the ornamental columns were removed and are now in the British Museum.

Since the Renaissance, the Pantheon has occasionally been used as a tomb. So here can be found the remains of painter Raphael, the composer Corelli, and two kings of Italy (Vittorio Emanuele II and Umberto I) as well as Umberto’s Queen, Margherita.

The interior wall has niches and chapels framed by multi-colored marble columns where you will find these tombs together with various memorial portrait busts, and paintings.

Take your time to wander around and absorb the sense of history and marvel at the architectural prowess of the Romans.

As you walk back out of the Pantheon look into the square ahead of you.

Directly in front you will see the “Fountain of the Pantheon” – the steps of which have partially disappeared under the current street level. The fountain was designed by a fairly well-known architect Giacomo Della Porta in 1575 and sculpted out of marble by Leonardo Sormani. In 1711, Pope Clement XI requested that the fountain be modified and had Filippo Barignoni design a new layout, which included a different basin, made of stone, and the obelisk of Ramses II set in the center on a plinth with four dolphins decorating the base.

Our visit to the Pantheon ends here but close by here are two other notable tours Piazza Navona and Largo Argentina.